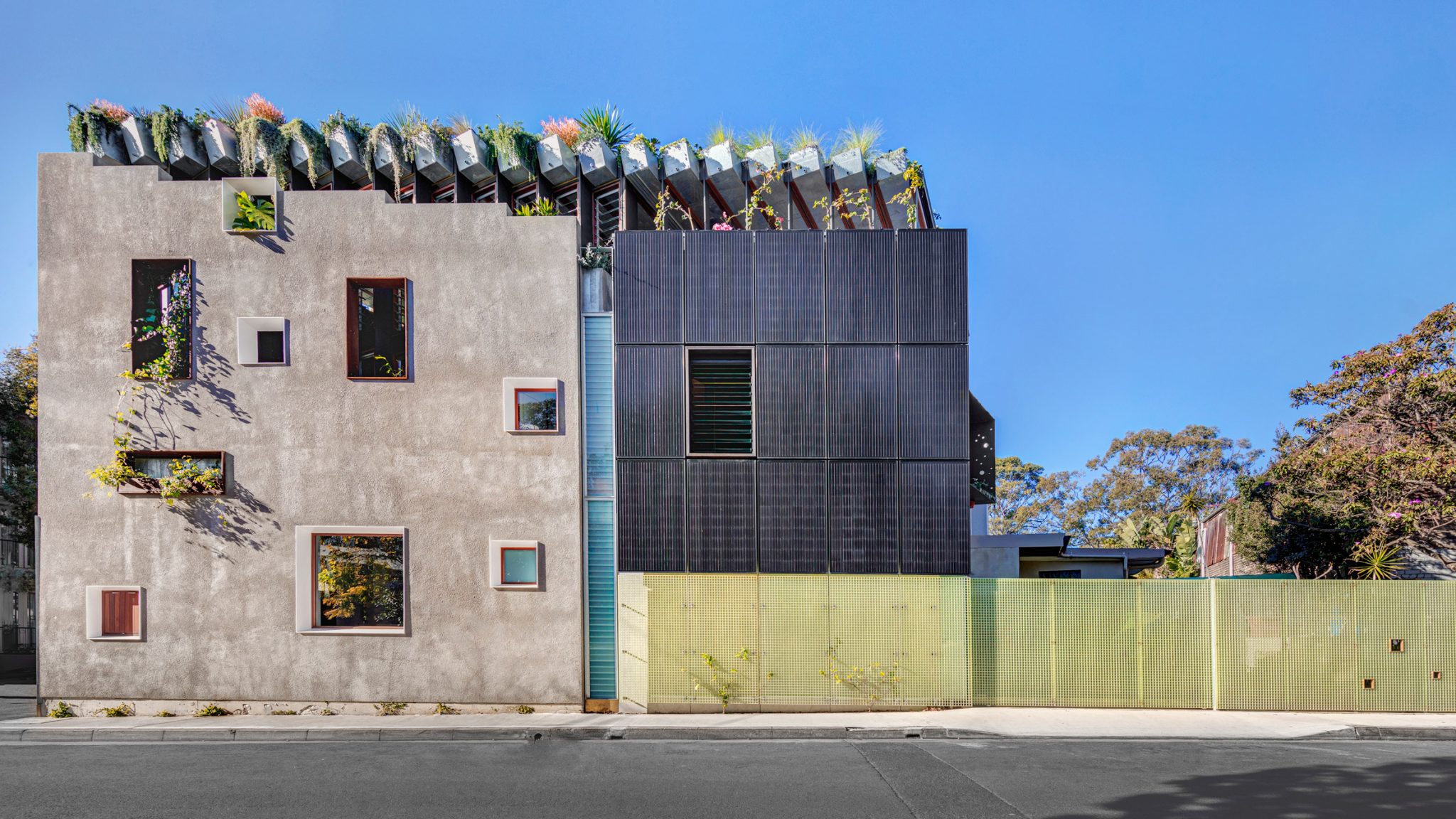 CplusC Architectural Workshop has built a house in Sydney with recycled materials, a rooftop vegetable garden and an aquaponics system containing edible fish.

Welcome to The Jungle House, which has been shortlisted for Dezeen Awards 2020 in the Residential rebirth category, is a home for the studio‘s director Clinton Cole and his family.

The project, with its solar panels, gardens and pond for edible perch, was designed in response to the climate emergency to be a model for more sustainable urban living.

A complete roof structure was designed to hold all the drainage for the open-air pond and planters for beds of fruit and vegetables.

Nitrogen-rich wastewater from the fishpond, which is located between the home’s outer facade and inner skin on the first floor, irrigates and fertilisers the garden. Rainwater drains into an underground tank, is filtered and pumped back up to the pond.

“The system was challenging to install,” said CplusC Architectural Workshop.

“But with a lot of collaboration between our plumber, landscaper, home automation, irrigation and weather-sensor contractors we were able to ensure the system was set up fully integrated without any major setbacks.”

“The system has been set up so that the residents can indeed harvest and eat the fish when they’ve grown to a big enough size,” CplusC Architectural Workshop told Dezeen.

“Unfortunately during Australia’s catastrophic bushfires earlier this year a layer of ash settled on the open tank and all the fish died,” explained the studio. “We have to wait until mid-spring to be able to reintroduce fish to the system, so the opportunity for harvesting the fully-grown fish is yet to happen!”

Welcome to The Jungle House was built on the site of a derelict house. The project involved demolishing the original building and building a new home on the wedge-shaped site.

At the front, the spackle-rendered facade was designed to make the house fit within the heritage area. A more modern panel-style facade is at the rear.

One exterior wall of Welcome to The Jungle House is covered in shiny black solar panels that generate energy for the house and act as a “billboard for sustainability”, said CplusC Architectural Workshop.

The positions of the original window opening were recreated and framed in pre-rusted steel to contrast with the new openings, which have metal frames with a glossy white powder coat.

A projecting bay window has a wooden door that can pivot on its hinges to open to the outside. When closed, two other openings can be opened to frame views of the greenery beyond, complemented by decorative handles in the shape of birds.

Another wood-lined window in the living room hinges at the top to let in air without overheating the room with direct sunlight.

Reinforced plastic grating in light green forms a fence down one side of the building next to the house. The owners have planted passionfruit vines, so neighbours can eventually come and pick the fruit.

“[It’s] a symbolic gesture of an architecture attempting to give more than just an aesthetic,” said the studio.

On the ground floor, an oversized porch of galvanised steel leads to a large home office with a polished concrete floor and a playroom for the children. Doors lead to a workshop and a garage with a place to charge the family’s electric car.

On the floors above a glazed interior wall was set slightly back from the facade. Inside the gap, large planters filled with greenery bring nature into the house and spill out down the facade.

A spiral staircase made of recycled timber and steel connects all three storeys of the house, doubling as a lightwell and drawing cool air down through the house.

The first floor is occupied by three bedrooms, bathrooms and a laundry. The main bedroom features the pivot window, and the other two bedrooms are filled with bunk beds and connected by bifold timber doors that can be opened to form one large room for sleepovers.

Low seating in the children’s rooms conceals storage and was designed to provide a vantage point to sit and watch the fish swim in the pond.Related storyClimbing-frame library in Vietnam has a thriving aquaponics system

“The architecture has made a very deliberate attempt to connect the children directly with their food sources to counter the detachment from food sources that current city-dwelling generations have developed as a result of our unsustainable industrialised farming systems,” said CplusC Architectural Workshop.

Upstairs is an open plan living area that extends beyond the parapet of the original house’s frame to provide views of the skyline.

Instead of a formal dining table, the kitchen has a long island-style counter that divides the space and doubles as a table for shared meals. Recycled timber was used for the island, contrasting with the metal cabinets.

The living and dining area opens on to an outdoor terrace with a fold-down ladder that leads up to the rooftop garden and vegetable patch. The structure of the roof beams forms the troughs for the beds of soil, with their exposed bases forming an industrial-style ceiling for the kitchen below.

As well as being intentional about the materials and setup, the architects are offsetting the carbon emissions from the renovation.

“Using real power bills we were able to estimate the total carbon footprint of the project over an expected 60-year lifespan,” explained the studio.

“We are now in the process of purchasing carbon-offset credits to neutralise the carbon footprint of the home and support biodiversity projects to regenerate Australia’s bushland ecosystems.”

CplusC Architectural Workshop was founded by Clinton Cole in 2005 and is based in Sydney. Recent projects include a concept to save the Sirius social housing building.

An aquaponics system has also been integrated in this library in Hanoi, Vietnam, that aims to connect inner-city children with education and nature simultaneously.

Photography is by Murray Fredericks.