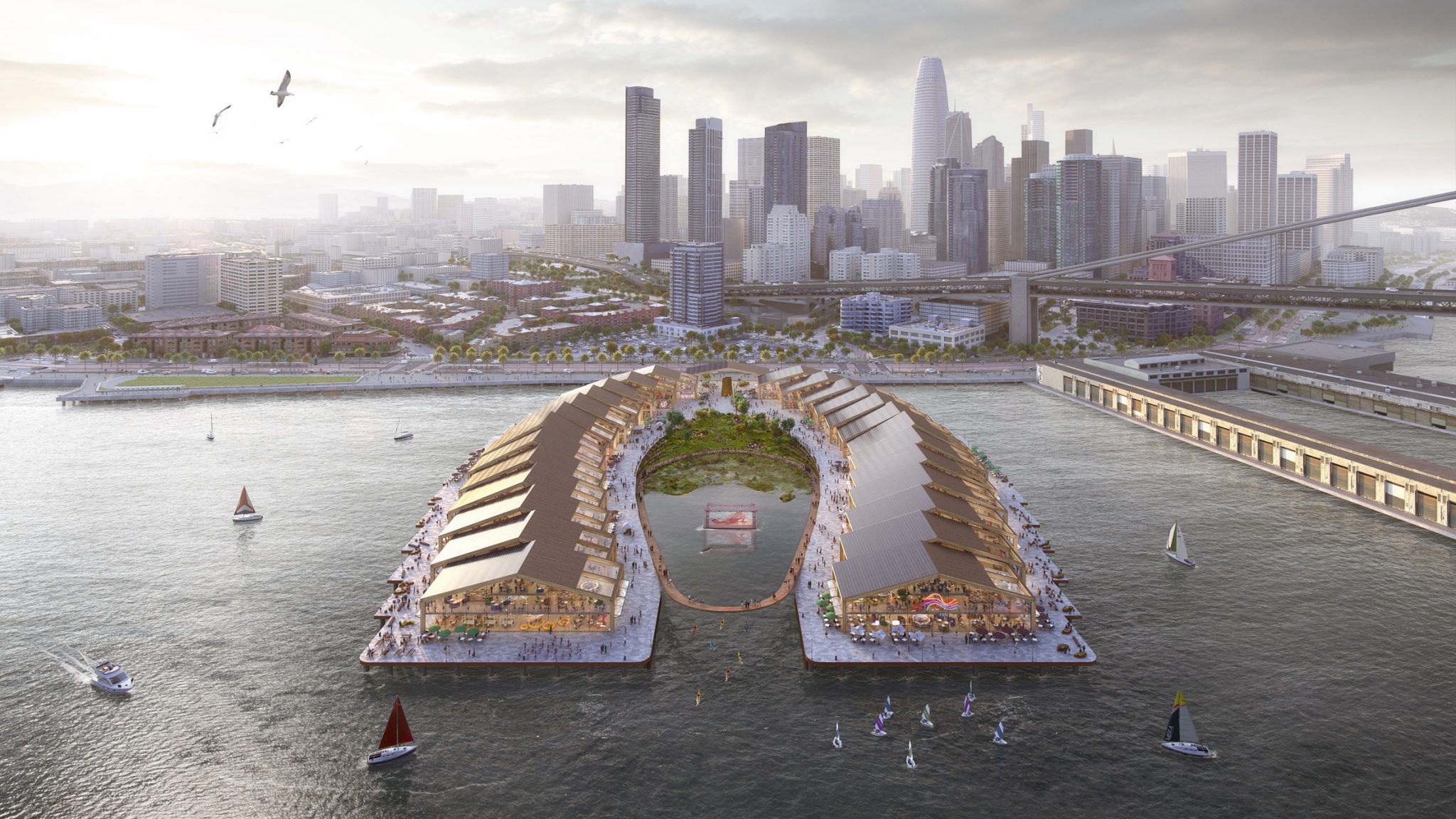 Heatherwick Studio developed conceptual proposal The Cove in a team of 20 called EPX2 for the site of Piers 30-32 at the southern end of the Central Embarcadero Piers Historic District.

Completed in the early 20th century in the city’s South Beach neighbourhood, the Embarcadero site was listed in 2016 as one of America’s 11 most endangered historic places by the National Trust for Historic Preservation.

The buildings on the 108-year-old Piers 30-32 have since been abandoned, while the piers have lost structural integrity and fallen into disrepair according to the team.

The Cove proposal is intended to provide a new hub of activity while addressing rising sea levels threatening the waterfront site and also consideration its history.

A “resilient pier platform” composed of concrete piles will rise above the sea level, which is forecasted to rise three feet (0.9 metres).

Elevated on top will be a workplace campus with two buildings flanking a five-acre, ecological public park. Grossing 550,000 square feet, The Cove is designed to be smaller than the footprint of the existing structures.

The buildings will be modular, with renderings showing gabled structures that interlock, and designed to be flexible to accommodate a range of functions like offices and shops. Walls are shown to be glazed so they open up to the crescent shaped park and water in between.

Steps for lazing edge the corner of the green space while a circular pathway extends around the inlet of water for sports activities like kayaking. According to the team it is designed to be reminiscent of California coastal bluffs and act as an Eco-Transect showcasing different natural habitats.

“A pedestrian-friendly journey through the ecological park winds from the Embarcadero promenade through a multi-use plaza, a rolling softscape of native terpene-laden trees and dune grasses, a carbon-sinking, floating wetlands, an oval boardwalk, onwards to a promontory, a bridge beyond, overlooking the bay,” it explained.

The Cove is also intended to be net-zero carbon and meet International Living Future Institute certifications, which outline practices for a building to be considered green or sustainable.Related storySix strategies for creating flood-resilient environments

EPX2, which also includes Earthprise and Sares|Regis, created The Cove in response to a request for proposals from The Port of San Francisco. The project is intended to align with the Embarcadero Seawall Program, an initiative to bolster the waterfront site from rising sea levels and earthquakes.

While the current design is still preliminary and expected to be adapted, the team is aiming to complete in 2026.

With its close proximity to water, San Francisco is one of a number of cities threatened by rising sea levels caused by climate change. A number of architects have developed projects for the city to address this issue.

Danish firm BIG, for example, designed a proposal to protect the San Francisco Bay with floating villages connected by ferries, a red-hued cycle route, and a highway for autonomous vehicles.

Another historic waterfront area in the city, known as Pier 70, is also being redeveloped to meet predicted sea levels. As part of the project, a waterfront building in San that weighs 2,075 tons was hoisted up over three metres above ground to protect it from flooding.

Renderings are by Heatherwick Studio, unless stated otherwise.

This Article First Appeared on DeZeen.