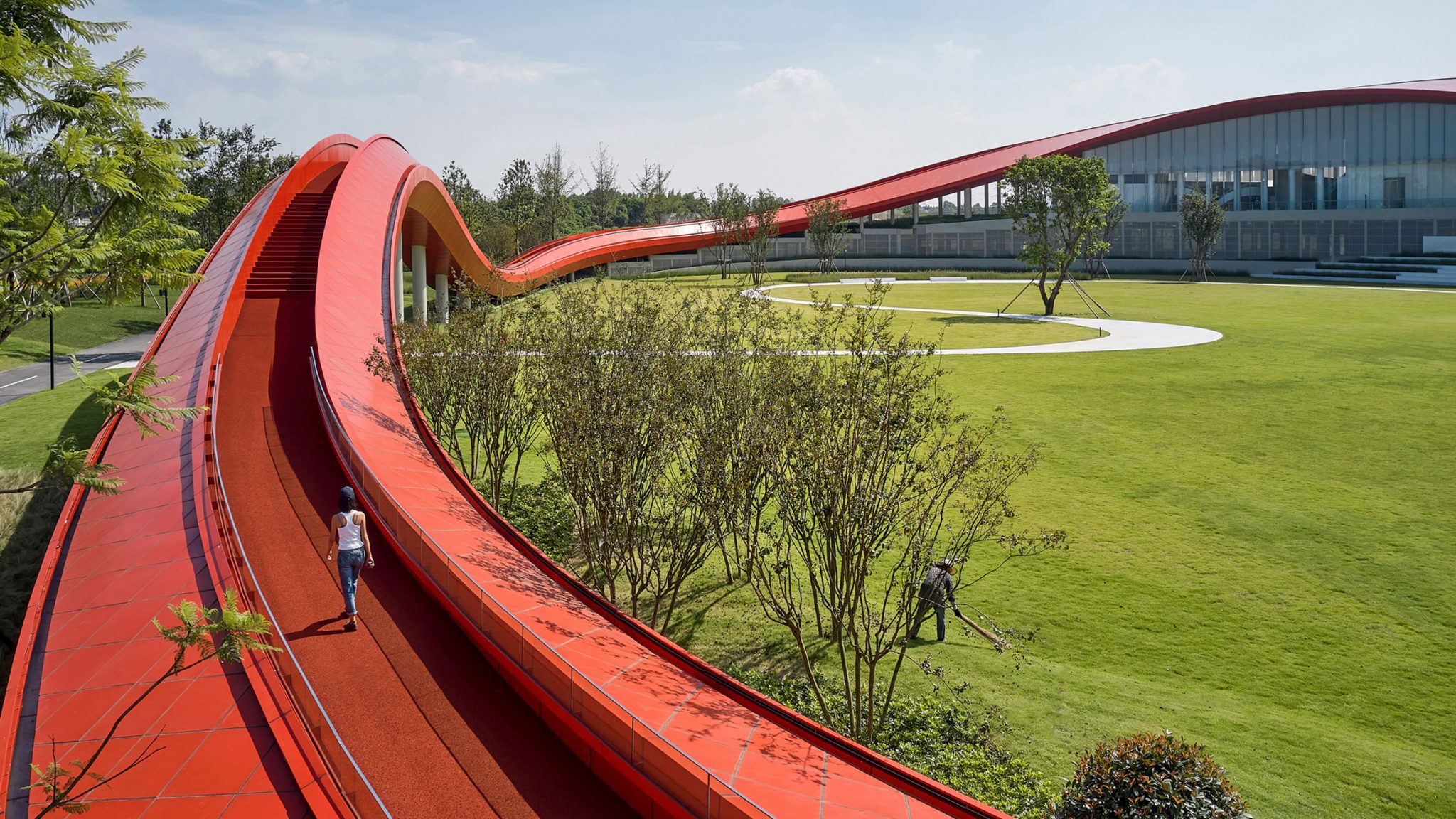 Architecture studio Powerhouse Company has created a reception building topped with a circular walking trail as part of a development in Chengdu, China.

The structures beneath the walking trail will act as a sales pavilion and reception block for the new Unis Chip City development in Chengdu’s Tianfu New District, which is under construction in the southern part of the city.

Powerhouse Company connected these two structures with a bright red rooftop walkway, named Loop of Wisdom, which is designed to make the reception block more useable than if it was a standalone building.

“While spectacular museums and reception centres are quite common in China, we wanted to create an icon that people can actually explore and use,” explained the studio’s founder Nanne de Ru.

The buildings were constructed on a slight hill, and the undulating terrain informed the 698-metre-long circular trail that rises up to form the roofs of the two structures.

“We wanted to work with the landscape rather than ignore it, so we used it to create an elegant, soft form,” said Stijn Kempe, partner at Powerhouse Company.Related storyWuchazi Bridge creates “infinite meandering path” over river in Chengdu

“The building is extremely contextual, even though it is the first building to emerge in this new neighbourhood of Chengdu,” he continued.

“Its design is complementary to the surrounding natural landscape and its gentle form invites people to come and explore the context and the surroundings.”

While the buildings are clad in aluminium tiles, the walking track is made from rubber asphalt so that the path can be used for runners as well as walkers.

The architecture studio hopes that this means that the building will be used by residents beyond its life as a reception building.

“The Loop of Wisdom shows how landscape can influence a building, and how parametric design can be used to achieve simplicity and elegance within a very complex structure,” explained Kempe.

“What’s more, our design is unique in shaping an iconic building so that it can be easily repurposed in the future,” he added.

Within the two buildings, full-height windows have been installed into exhibition and office spaces to allow views out to the surrounding park.

The concrete interior spaces are complemented by wooden ceilings.

Once the development is complete, the reception block will be converted into a library and sports centre for a school that is planned for the site adjacent to the building.

Powerhouse Company is a Rotterdam-based architecture studio that has international offices in Beijing, Oslo and Munich. The studio previously designed a broadcast tower and visitor centre in Turkey that was connected by a circular raised path.

It has recently revealed plans to create a floating off-grid office in Rotterdam and to convert a Brutalist bunker into a housing tower.

This Article Also appeared on DeZeen