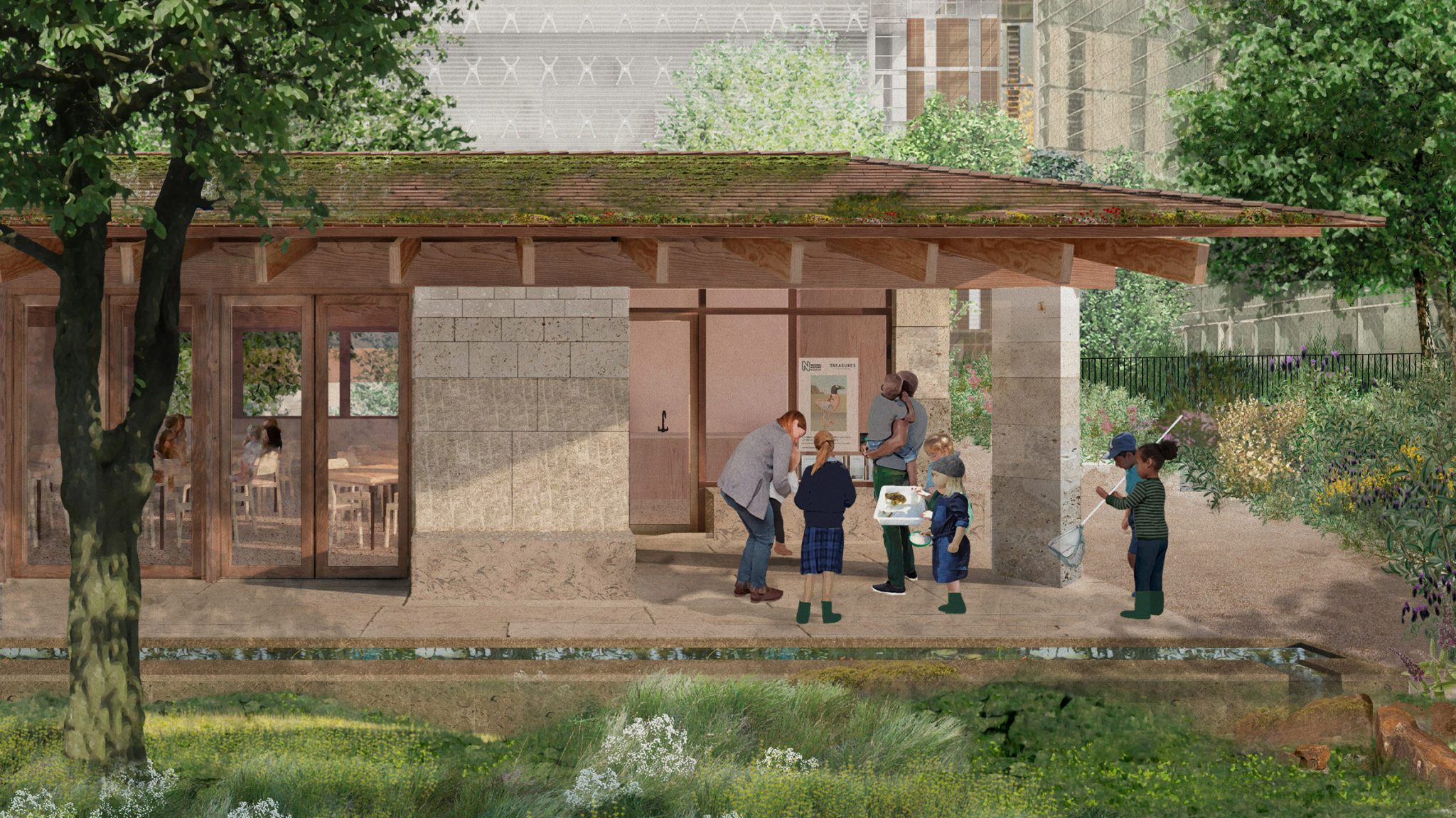 Feilden Fowles and J & L Gibbons have unveiled plans to overhaul the gardens at London’s Natural History Museum to create a hub for education and biodiversity called the Urban Nature Project.

The Urban Nature Project will involve the redesign of two hectares of land around the iconic 19th-century building by Alfred Waterhouse, alongside the construction of two low-lying, stone-clad pavilions.

Feilden Fowles and J & L Gibbons‘ aim is to maximise the biodiversity and accessibility of the museum’s grounds and, in turn, invite people living in and visiting the capital to re-engage with nature.

“The Urban Nature Project is a dream commission, embodying so many of our team’s social and environmental values,” said Edmund Fowles, director of Feilden Fowles.

“Never has the need to re-engage with nature and understand our impact on biodiversity been more urgent,” he explained.

“Together with the transformation of the museum’s five-acre gardens, two new pavilions embedded within the landscape will provide much-needed facilities to broaden access and engagement with the vital messages of the project.”

The Urban Nature Project is slated for completion in 2023 and forms a part of the Natural History Museum’s wider ambition to protect nature in urban areas and make cities more sustainable places to live.

The proposal replaces another design for the site by Niall McLaughlin Architects and Kim Wilkie that imagined an upgrade to the museum’s entrance areas, but was never realised.

The scheme is divided into two gardens, positioned to the east and west of the museum’s entrance, which will be landscaped to offer a brief overview of natural history and encourage local biodiversity.

In the east-side garden, this will include plants, fossils and exhibits that echo different geological eras ranging from the Cambrian period 540 million years ago to the present day.Related storyFeilden Fowles unveils The Weston visitor centre at Yorkshire Sculpture Park

The east garden will also feature a replica of Dippy, the Natural History Museum’s famous dinosaur skeleton that once occupied its main hall, and incorporate the first of the two pavilions by Feilden Fowles.

This pavilion, named the Garden Building, is modelled on Victorian orangeries and contains a cafe, seasonal storage and a display of the exotic plants.

Urban Nature Project’s west garden will be designed by the studios as a model urban landscape, giving insight into biodiversity that can be found in cities in the UK.

Nestled within it will be the scheme’s second pavilion, the Learning Centre, which will be used for scientific projects, educational activities, and as space for the volunteers that maintain the museum’s gardens.

According to Feilden Fowles, both pavilions will be clad in stone and are being developed with a “low-tech” approach to ensure they have a low carbon footprint.

The west garden will end at the museum’s existing Darwin Centre courtyard, which will be redesigned to address the future of biodiversity on Earth.

It will showcase pioneer species – types of organisms that are the first to colonise barren environments – and encourage visitors to help preserve nature by highlighting approaches to climate adaptation and ways to improve biodiversity.

The scheme will be complete with a bronze sign at the end of a ramp leading to the museum’s entrance featuring a quote by David Attenborough, reading: “the future of the natural world, on which we all depend, is in your hands”.

Attenborough, a British broadcaster and natural historian, has welcomed the proposal and said it will help “the next generation develop the strong connection with nature that is needed to protect it.”

Feilden Fowles is a British architecture studio founded in 2009 by Fergus Feilden and Edmund Fowles. In 2019, it was shortlisted for the Stirling Prize for its design of The Weston visitor centre and gallery at Yorkshire Sculpture Park.

Other recent projects by the studio include a red brick school building in Somerset and a showroom and office for Uniform Wares that offers visitors a glimpse of the watchmaking process.

Visuals are by Feilden Fowles and J & L Gibbons.