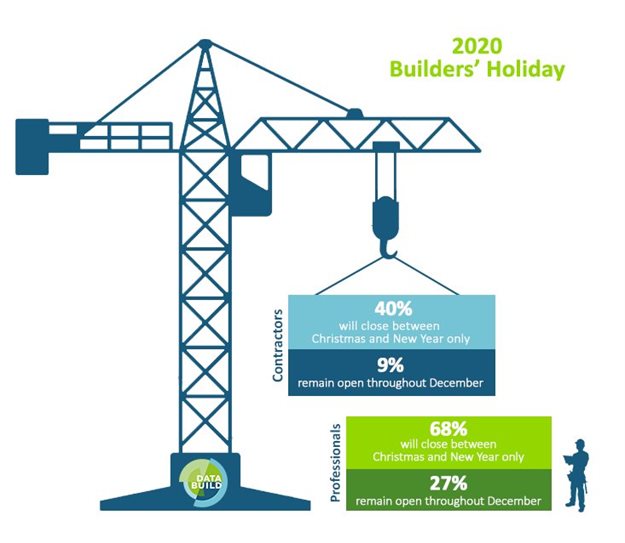 According to a recent Databuild survey, many construction industry stakeholders are breaking with tradition and opting to keep their doors open over the December holiday period. The annual South African builders’ break, which usually starts around mid-December and continues into the first and sometimes second week of the New Year, is a tradition that has previously been strongly observed by the entire construction industry, including contractors, sub-contractors, suppliers and professionals.The survey revealed that many have decided to use the time as an opportunity to catch up on work delayed by the five-week compulsory shutdown earlier in the year, brought on by the outbreak of the Covid-19 pandemic.

Databuild CEO Morag Evans explains: “As part of keeping the industry informed about activities over the December period, we sent a questionnaire to 346 Databuild clients, contractors and professionals, including engineers, architects and quantity surveyors, asking whether they intended to work during December.

“While the majority of respondents indicated that they will be closing for the holidays, a significant portion stated their intention to continue working in December.”

According to Evans, of the 78 contractors surveyed, 40% said they would remain open during December but close during Christmas and New Year, while an additional 9% said they would work throughout December.

Among the 186 professionals surveyed, 27% indicated they will remain open throughout December, while 68% plan to close between the Christmas and New Year holidays only.

“While the survey sample is small and the results obtained anecdotal, it is clear from the responses received that the Covid-19 pandemic and subsequent lockdown have had a marked impact on numerous construction role players,” says Evans.

“Even though the construction industry was able to reopen in lockdown Level 3, for many companies it’s still not business as usual as they struggle to regain momentum, and the luxury of a December break is something many are unable to afford in the current bearish economic climate.”

Whether South Africa will be able to stave off a second wave of the coronavirus and return to hard lockdown remains to be seen, but the construction industry will nevertheless continue to feel the effects of the pandemic for many more months to come.

Consequently, says Evans, construction companies need to remain on the front foot to proactively mitigate the impacts on their business.

“Choosing to forego the customary December break speaks volumes about companies’ determination to do whatever it takes to bring the construction industry out of its slump, which is commendable,” she concludes.