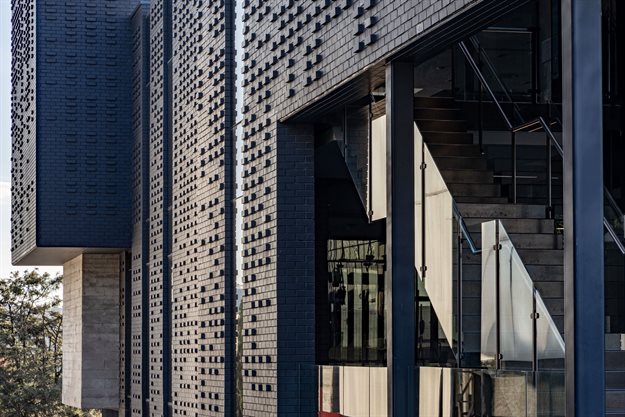 Having worked with Alchemy Properties on several of its buildings in the Kramerville Design District in Johannesburg, including 37 & 35 Commerce Crescent and separate projects at 33 & 39 Commerce Crescent, Paragon Architects is currently busy with construction for 31 Commerce Crescent. A common pallet of materials has been used, namely black brick, off-shutter concrete and glass. However, each building has its own unique take on how these materials have been incorporated.

The only new build project in the development is 33 Commerce Crescent. “The building’s form has the same language as its surrounding architecture, but creates its own uniqueness with a braille-like pattern brick façade,” explains project architect Kirsty Fick. The building consists of three levels, namely Lower Ground, accessible from Commerce Crescent, Upper Ground and a First Floor accessible from the top entrance along Bowling Avenue.

“We wanted to create high visibility for both Commerce Crescent and Bowling Avenue. It was important for the client that each floor plate could be subdivided into multiple tenancies. This was the driver behind the form, resulting in three levels with different entrances,” notes Fick.

As a new-build project, Paragon Architects was able to control and design for any structural challenges. A cantilevering brick box protrudes onto Commerce Crescent, consisting of a double-volume space overlooking Sandton. There is a strong contrast between the off-shutter concrete, black patterned brickwork and reflective glass bands. The black-brick façade has protruding bricks to create texture, while the strong vertical forms of glass reflect its surroundings.

The entrance visible from Bowling Avenue has a double-volume atrium with a floating steel staircase, bespoke 5.5m hanging planters and light pendants. The steel staircase looks like a single sheet of steel spanning over 8.4m, creating a ribbon-like effect, with the stair effectively sailing above a garden below. Paragon Architects also designed 1.6m x 2m steel mirrors exclusively for the ablutions.

The two steel staircases posed a particular design and costing challenge. “We had to ensure it was in the allowable budget, but keeping to the design intent,” explains Fick. Many workshops were held with the engineers, subcontractor and Paragon Architects to achieve the desired result. The steel stairs are supported by two 250mm x 100mm steel stringers that allow for the 8.4m span. The glass balustrade is supported by steel posts that hang off the steel stringers.

Meanwhile, 39 Commerce Crescent also had to tie in with all the other buildings along the street, highlights senior project architect Kim Newell. While using the same pallet of materials, its form breaks away from the rectilinear lines of its neighbours. The façade is made up of angled forms that cantilever 1.2m off the existing structure, separated from each other by reflective glass bands.

Traditionally, brick façades are rectilinear. However, at 39 Commerce Crescent the bricks were set out at 70° angles to create the sloping forms that wrap around the building. To create the sloping walls, Paragon Architects had to alter the pattern that conventional face bricks are laid in. Each course is offset from the one below.

Detailed drawings of the brick façades were created to determine what would happen to the pattern when it needed to change direction around a 90° corner. Cut bricks were inserted into the pattern to ensure that it could be continued around corners, without interrupting the visual impact of the staggered pattern. The rough off-shutter concrete façades mimic the slope of the angled brickwork. Reflective glass punctuated the junctions between these two materials.

This project involved converting an existing three-storey commercial building into a four-storey showroom. The existing structure was retained and strengthened where required. To add an additional floor, the foundations had to be stiffened and the size increased to accommodate the additional loads.

Large openings had to be created in the existing floor slabs for new fire-escape stairs and service ducts, as well the atrium opening in the centre of the building. Carbon-fibre strips and steel I-beams were installed on the underside of the existing slabs to strengthen them, reducing the need for additional columns. This allowed the floor plate to remain as open as possible, ideal for its showroom function.

The conventional industrial façades were transformed by sloping off-shutter concrete and black brick façades cantilevered off the existing structure to form the futuristic exterior. The façade forms are punctuated with reflective glass panels. Internally, a new atrium was created to bring light into the centre of the deep floor plate, in addition to future-proofing the building.

The internal atrium allows all floors to be accessed from a central common area, allowing the building to be let to multiple tenants. A central staircase was installed in the atrium void to connect the four levels. A skylight was installed above the staircase on the new floor level to allow light into the centre of the floor plate.

The sculptural stair was designed in Rhino, with the 3D form flattened to form panels that were subsequently laser cut to create the formwork cast in place for the stair. “This allowed us to create a complex form that would not have been possible with conventional formwork,” adds Newell. The building is let to a single tenant that wanted to maximise the usable area. Early on in the project it was decided to convert the roof space into an open-air showroom, which enjoys a panoramic view out towards Sandton.

This article first appeared on Bizcommunity. For the original click here