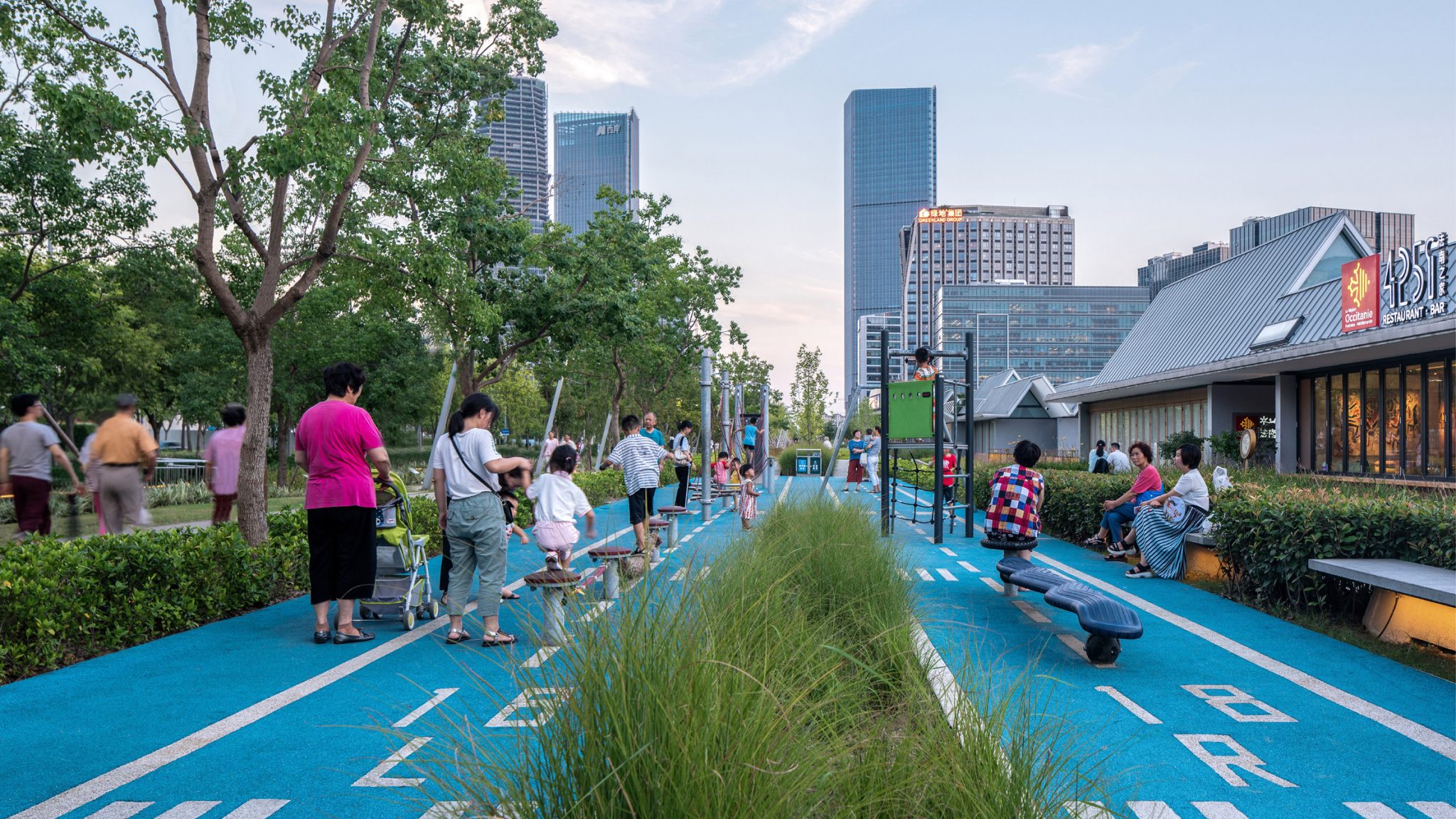 “With the recent redevelopment of the Xuhui riverfront area into a mixed-use district, the historic runway is embracing its new life,” Zhang told Dezeen.

“Master-planned as a public street and linear park side-by-side, this project serves as a runway of modern life, offering a space of recreation for nearby communities as well as a respite from the high-density redevelopment around.”

The runway site has been transformed into a linear park that contains pedestrian walkways and cycle paths alongside a new road, while six rows of deciduous trees run the length of the park.

It has been divided into a series of smaller gardens and planted areas that are connected by concrete pathways.

“The unusual linear and monolithic shape of the existing runway offered us unlimited inspiration,” said Zhang.

“To reflect the site’s previous history, our design mimics the motion of a runway, creating diverse linear spaces for vehicles, bicycles, and pedestrians by organizing the park and street into one interconnected sequence at a runway scale,” she continued.

“While the spaces are linear in form, diverse spatial experiences are created by applying different materials, scales, topography, and programs.”

Sasaki wanted to include parts of the historic concrete runway, which had been covered by a temporary pavement following the airport’s closure, within the park to reflect the site’s history. After revealing the runway, the studio identified several elements that could be incorporated within the park.

The main pedestrian path through the park is formed from a 3.6-metre-wide section of the runway that still has its original direction markings preserved, while demolished pieces were used alongside the pathway.

“The amazing scale and unique character of the extensive concrete pavement often left us puzzled as to how we could both preserve the historic runway and construct a lush urban park,” explained Zhang.Related storyCOBE’s undulating public square in Copenhagen contains parking for 2,000 bikes

“When the design scheme was initiated, it was unclear whether the historic concrete was intact or not under the temporary pavement,” she added. “After careful testing, the contractor was able to peel off the top layers of asphalt and concrete, stripping it down to the concrete  runway.”

The park was designed to collect runoff rainwater from the surrounding area with a large rain garden created at the north end of the park and a collection basin built under the wetland to the south.

Polluted stormwater from the surrounding developments and streets is stored and cleaned within the park to allow it to be used within its water features and for watering.

“Surface water quality is a big issue of concern in the city of Shanghai,” said Zhang.

“The Runway Park project offered us an unpreceded opportunity to use state-of-the-art technology to offset the negative impact from street runoff while designing the park and the street simultaneously.”

Now the park, which was shortlisted for landscape project of the year at Dezeen Awards 2020, is complete, Zhang hopes it will become an asset to the emerging neighbourhood.

“The park inherits the site’s history while bringing modern comfort and diverse programs to nearby neighbourhoods, students, and office workers,” she said.

“It is open to all ages and groups and mostly free of charge. I hope people will feel energized, engaged, relaxed, immersed, and equally respected in the park.”

Xuhui Runway Park was shortlisted alongside projects including a cantilevered viewing platform made from weathering steel in Austria and a folded playground in China. Architecture studio Cobe won the award for its undulating public plaza with sheltered parking for bicycles in Copenhagen.

This Article First Appeared on DeZeen. For the Original Click Here