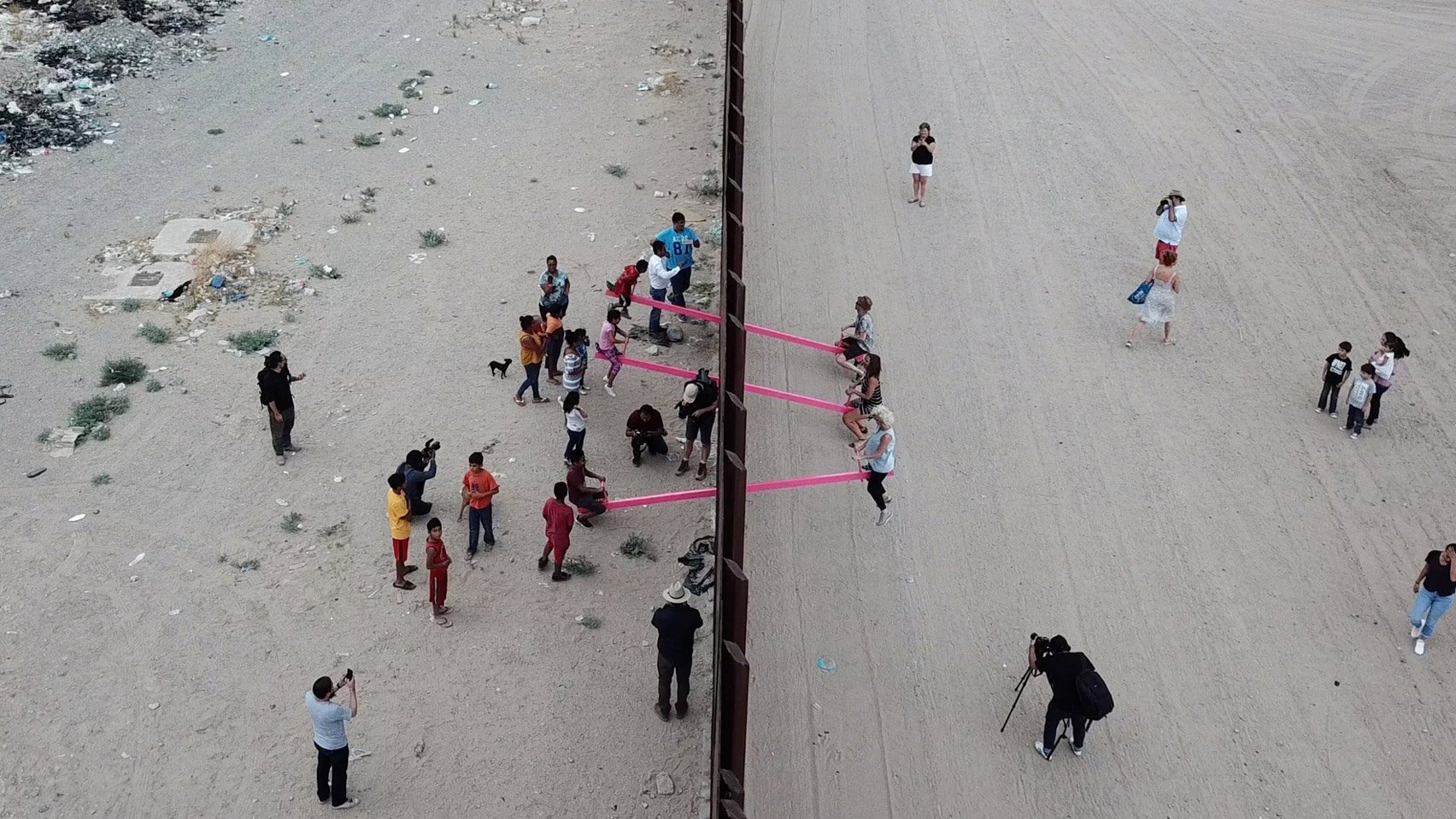 An installation by architecture studio Rael San Fratello, which connected children in the US and Mexico via a trio of seesaws slotted into the countries’ border wall, has been crowned the Design of the Year.

Dubbed the Teeter-Totter Wall, the project was in place for only around 40 minutes in July of 2019 and hoped to foster a sense of unity at the divisive border, which was highly politicised under the Trump administration.

Today, the seesaws devised by architects Virginia San Fratello and Ronald Rael were named both the transport category winner as well as the overall winner of the Beazley Designs of the Year awards, which are organised by London’s Design Museum every year.

A five-person jury, which included designer Camille Walala and Ma-tt-er founder Seetal Solanki, came to its decision in the immediate aftermath of Joe Biden’s victory in the US presidential election.

Now, the result is being announced just a day before his inauguration and Donald Trump‘s departure from office.

In light of these events, Rael San Fratello‘s project once again takes on a particular significance, with the Design Museum‘s chief executive and director Tim Marlow describing it as an “inventive and poignant reminder of how human beings can transcend the forces that seek to divide us.”

“It’s become increasingly clear that walls don’t work,” San Fratello added. “Walls did not keep the violent protestors out of our government buildings and they have not kept Covid out of our country. We should be building bridges, not walls.”

“We are living in a time when people are longing for meaningful connections and we would like to think the teeter-totter can be an example for how we come together, to create balance and equality,” she told Dezeen.

“Play can be an act of resistance”

Rael San Fratello worked with Mexico’s Colectivo Chopeke to smuggle the seesaws into place, with one team coming from each side of the border to help slide the boards in between the tall, metal slats that divide El Paso in Texas from the Mexican city of Ciudad Juárez.

In a live interview as part of Dezeen’s Virtual Design Festival last year, San Fratello revealed that the “guerilla project” never received official permission and was designed to be assembled as quickly and covertly as possible in case border patrol were to intervene.

The aim, San Fratello said, was to show that “play can be an act of resistance”.

“The teeter-totters point out the atrocity of the border wall while simultaneously bringing people together to share in our common humanity,” she added.

“We think the teeter-totters resonated with so many people around the world, including the judges, because as an act of resistance they were playful and positive. It was a message of joy and hope for the future.”

Several of the category winners at this year’s Designs of the Year awards focused on topics of activism and protest, with the title of best digital design going to a performance piece called Un Violador en Tu Camino or A Rapist in Your Way.

Originally devised by Chile’s Colectivo LASTESIS, the choreographed chant was a rallying cry against sexual and gender-based violence, which spread like wildfire across the internet and was performed by groups of women across Latin America, as well as in Istanbul, Paris and New York.

Similarly, this year’s People’s Choice winner is a simple arch made of three bricks, which was devised by Hong Kong’s pro-democracy protestors as an impromptu, DIY roadblock to slow the advance of riot police.

Coronavirus and ethical consumerism among other themes

The 2020 Designs of the Year awards only considered projects that were realised between January 2019 and January 2020, effectively excluding much of the growing body of work created in response to the ongoing Covid-19 pandemic.

But a 3D rendering of the coronavirus particle, which was commissioned by the US Centers for Disease Control and Prevention (CDC), did manage to take home the top prize in the graphics category.

The render gave the virus an instantly-recognisable face and “identity”, which medical illustrator Dan Higgins told Dezeen was crucial to stop it from being perceived as an invisible enemy.

“We wanted to create a realistic virus that people can envision when walking into public places or coming in close contact with strangers,” he said. “Something that says this virus is real, and it’s to be taken seriously.”

Responsible, ethical consumption was another key theme, with the meat-free Impossible Burger 2.0 being named the best product design of the year and the gender-neutral, vegan leather Telfar bag taking home the top prize in the fashion category.

Meanwhile, this year’s architecture winner was ModSkool, a modular school for squatters in India that is made using local materials and techniques and can be quickly dismantled and reassembled somewhere else, should the settlement be demolished.

The Design Museum currently remains closed while the UK is in lockdown but an exhibition showcasing the 2020 Designs of the Year will be on view until at least the 28 March. See Dezeen Events Guide for an up-to-date list of architecture and design events taking place around the world.

To view the original of this article on DeZeen click here