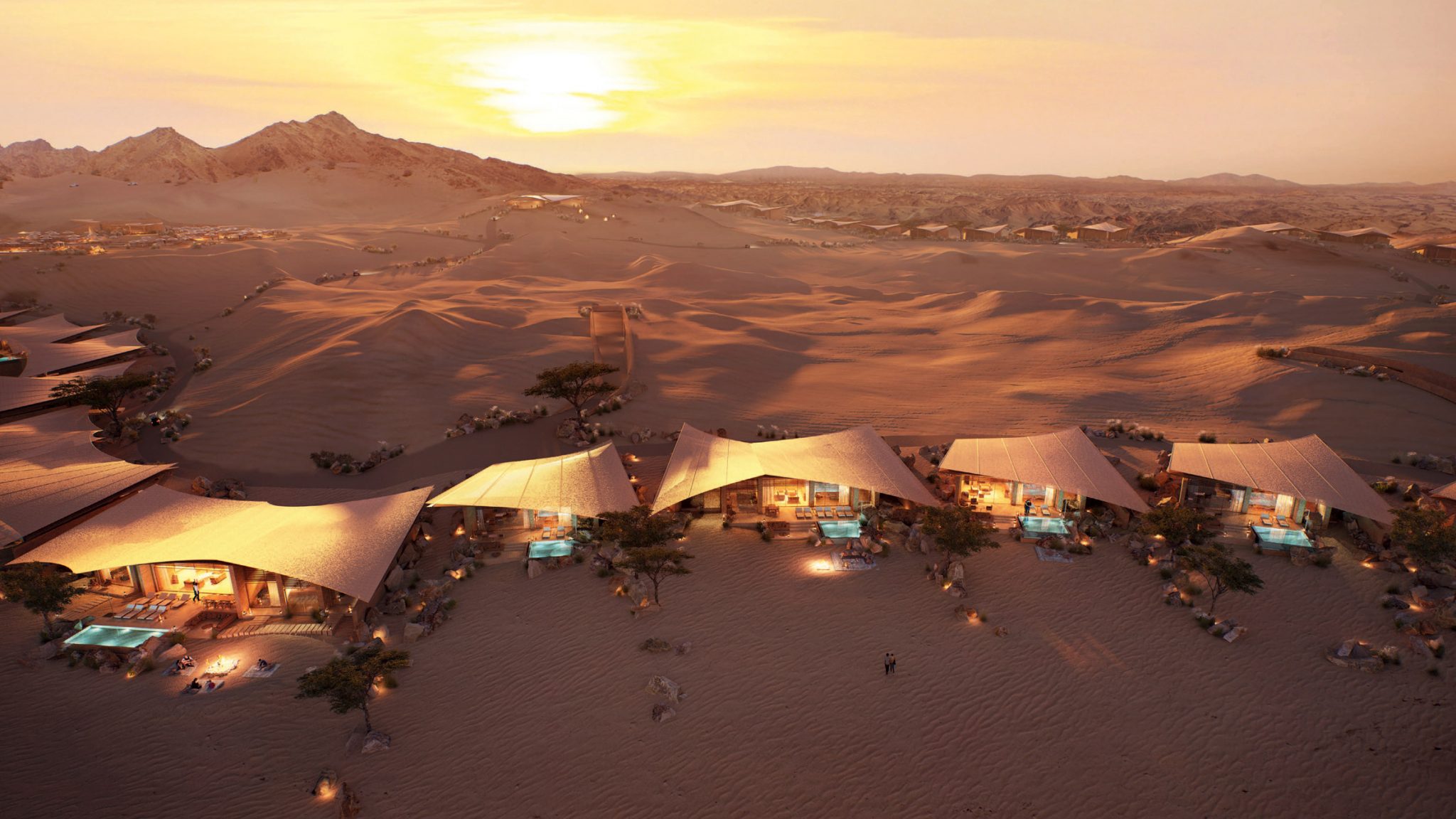 Foster + Partners is designing the Southern Dunes hotel in Saudi Arabia as part of The Red Sea Project tourist development on the western coast of the country. Named Southern Dunes, the Foster + Partners-designed hotel will contain 40 villas sheltered by asymmetric timber roofs. Set to be built around 100 kilometres northeast of the town of Umluj, a beach town on Saudi Arabia’s Red Sea coast, the hotel complex will be surrounded by a remote desert landscape.

The project is one of two inland hotels being built as part of The Red Sea Project, which will see a chain of around 90 uninhabited islands in the Red Sea developed into a tourist resort.

The Southern Dunes hotel villas will be arranged in two lines to take advantage of the view of the surrounding dunes.

Alongside the villas, the development will contain reception buildings, a spa, a large pool and several restaurants. Staff accommodation for 700 employees is also being built as part of the project.

Although few details about the hotel have been released, visualisations show villas with asymmetric timber roofs topped with fabric supported on timber frames.

In contrast to the angled forms of the villas, the communal buildings and spaces are sheltered by groups of curved umbrella-like forms supported on timber columns.

Foster + Partners designed the hotel to be built using materials that are appropriate for the hotel’s desert location to reduce its dependence on artificial cooling.

“From our work previously in the desert, one of the most important things is to avoid using what we call high thermal mass materials,” said Gerard Evenden, head of studio at Foster + Partners.

“If you use stone or concrete in the desert, the problem is that over time it heats up and it becomes a thermal mass,” he said.Related storyFoster + Partners to create ring-shaped hotel on stilts in Saudi Arabia

“They radiate heat and they hold the heat. And because in the desert they are being baked every day, they never get cooled,” he continued.

The studio designed the structures for the hotel to be lightweight and intends to fabricate elements offsite to speed up the construction process.

“So the physical makeup of your buildings needs to be lightweight. Lightweight materials. Simple materials that construct together,” said Evenden.

“They can then be transported as finished items. The more transportable finished items we can bring, the better,” he continued. “That will lead not only to fast reactive buildings but will also lead to incredibly energy-efficient construction.”

Designed as part of the first phase of The Red Sea Project, the Southern Dunes hotel is set to open in 2022.

It is one of several projects designed by Foster + Partners as part of the tourist development, which its creators are billing as the “world’s most ambitious tourism development”.

The studio has designed a ring-shaped hotel on stilts and is also turning the dolphin-shaped island of Shurayrah into a holiday resort.

The studio is also working on the design of a fully automated mega-city in Saudi Arabia called Neom, although its founder British architect Norman Foster temporarily suspended himself from the project’s advisory board in response to the murder of journalism Jamal Khashoggi in 2019.

Article was first published on Dezeen.com, for the original click here