Fish Hoek beachgoers: look out for the mural in the making 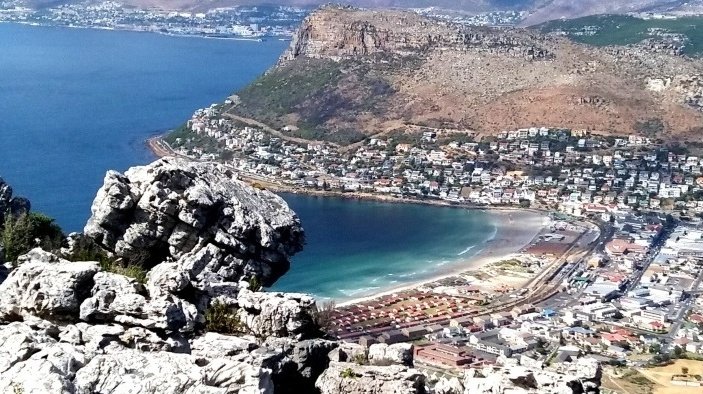 The City’s Mayoral Committee Member for Spatial Planning and Environment, Alderman Marian Nieuwoudt today, joined mural artist Claire Homewood, of CareCreative and local students from Fish Hoek and Kommetjie for the commencement of a mural painting at the Fish Hoek Beach law enforcement building. This community led and funded initiative which aims to develop a mural in Fish Hoek with the aim of educating the public about the rise in sea-level; what it means for Cape Town and how residents can lower their carbon footprint in an effort to mitigate against the rise in sea level into the future. The City’s Coastal Management team has supported the initiative by assisting with the public art application and providing concepts behind the design. Read more below:

The full-colour mural will wrap around several walls of the Fish Hoek beach building depicting the local beach-hill scape and people at different ages experiencing the advancing sea-level. The lines depicting the rising sea level are scientifically well-understood and predictions are a finely calculated consequence of planetary heating. A QR code will be provided which will be included on the mural and enable residents to access to additional information on the City’s website when scanned by a cellphone.

The concept of the picture was borrowed with permission from Vancouver City, Canada but was significantly modified to represent the South African context. The intention of this mural is to illustrate the issue of the rising sea level through comparing a person’s lifespan against real projected scenarios of a rising sea level. The scenarios used have been taken from the latest Intergovernmental panel on Climate Change’s Special Report on the Oceans and Cryosphere in a Changing Climate and reflect global sea-level rise projections.

‘The City’s approach to creating awareness on key environmental issues such as the rising sea level includes collaborations across all societal spheres. This community based project is the perfect example of using a creative medium to illustrate the very real and serious threat, which will affect our coastline. We believe that intentional and creative community projects which require active involvement from various role players can achieve the kind of awareness and social responsibility around environmental threats that we need, said the City’s Mayoral Committee Member for Spatial Planning and Environment, Alderman Marian Nieuwoudt.

The popular Fish Hoek beach was chosen as a good location to raise awareness of this inter-generational threat.

‘The message we hope each resident will take away after seeing this mural is that the decisions we make every day going forward can reduce future risk’, said Ward Councillor Aimee Khul.

Claire Homewood, of CareCreative, has played a lead role in several large scale murals between Muizenberg and St James and is being assisted by students from schools in both Fish Hoek and Kommetjie.

Far South Peninsula Community Forum (FSPCF) members, Kim Kruyshaar and Patrick Dowling are the coordinators of the project, which should be complete by the end of March 2021.