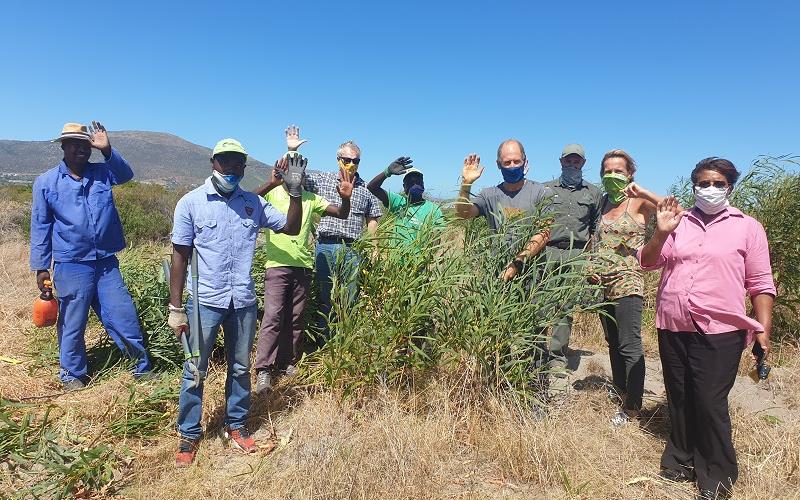 The City of Cape Town’s Recreation and Parks Department has joined hands with non-profit organisation Project Noordhoeked to clear invasive alien vegetation growing in parts of the Noordhoek Wetland.

Local non-profit organisation Project Noordhoeked, which has been run by local resident Karoline Hanks since 2017, has driven community based environmental projects within Noordhoek to create jobs, keep the neighbourhood safe and to create awareness about factors impacting the environment.

The latest project was undertaken in partnership with the City’s Recreation and Parks Department, to clear the invasive Port Jackson (Acacia saligna).

Previously, project Noordhoeked focused on clearing the streets of litter and collecting micro-plastics from the beach. While these projects didn’t require extensive training, when the group decided to tackle the invasive vegetation growing in a nature sensitive area, it was clear that additional support would be necessary.

The department stepped in to provide authorisation, training, equipment and the herbicides needed to successfully work through the dense area. With additional assistance from SANParks, the group has already cleared one hectare and will continue twice a week to maintain and manage regrowth.

‘There is a visible difference at the wetland as a result of this community partnership. The benefits are already starting to show near the sports field, where dog walkers and horse riders have started to enjoy the area again. The City would like to extend its heartfelt appreciation to these community champions, who have responded to the call for residents to start taking ownership of public parks and recreational spaces,’ said the City’s Mayoral Committee Member for Community Services and Health, Councillor Zahid Badroodien.

The department has regular maintenance schedules to maintain the sensitive wetland ecosystems, which play a crucial role in water purification, water storage, stabilising shorelines, filtering soil nutrients and which support the success of fauna and flora, protecting the habitat of animal species like the endangered Western Leopard Toad.

However, seasonal changes such as growth spurts due to favourable weather conditions and the disruption of the national lockdown, have affected normal services. The community responded to this as an opportunity to get involved and lend a hand.

Wetlands also provide recreational opportunities for the residents, who take to the outdoors for canoeing, wind surfing, environmental research, photography, and nature appreciation.

‘This partnership is one of many initiatives that we hope to celebrate as part of this year’s “Parks are Ours” campaign, which is all about encouraging more community participation in preserving the City’s parks and green spaces. Community involvement has been shown as one of the topmost contributors to maintaining public open spaces as valuable community assets and significantly reduces incidents of vandalism and antisocial behaviour, which costs the City millions every year,’ added Councillor Badroodien.

The oversight provided by the Department in removing Port Jackson is important for sustainability, to ensure that the invasive species does not grow back. The volunteer teams have been taught to cut the stems as low as possible, or to remove the plant from underneath its growth point, to achieve the most effective result.

A herbicide with blue dye is only applied to thick plant stems that have been cut down. The dye indicates to park visitors that the stem is treated with herbicides, and reminds the team of where they have already worked to avoid re-application. If the cutting is done incorrectly, the re-growth will be even more difficult to remove, as often multiple side branches start growing from below the cut point.

Cut plants are also disposed of by carefully being layered on site to decompose naturally. This may be unusual, however experts advise that if moved and dragged across the land, the seed could spread, resulting in new plants across the wetland.

The work of the department’s horticulturists is ongoing and critical in monitoring and evaluating how vegetation grows and how these interventions are maintained in the long term.

To participate in the campaign by initiating a project or to get more involved in existing projects in your area, please contact your local ward councillor or email RecreationandParks.Marketing@capetown.gov.za