“I Grew Up Where Architecture Was Designed to Oppress”: Wandile Mthiyane on Social Impact and Learning from South Africa 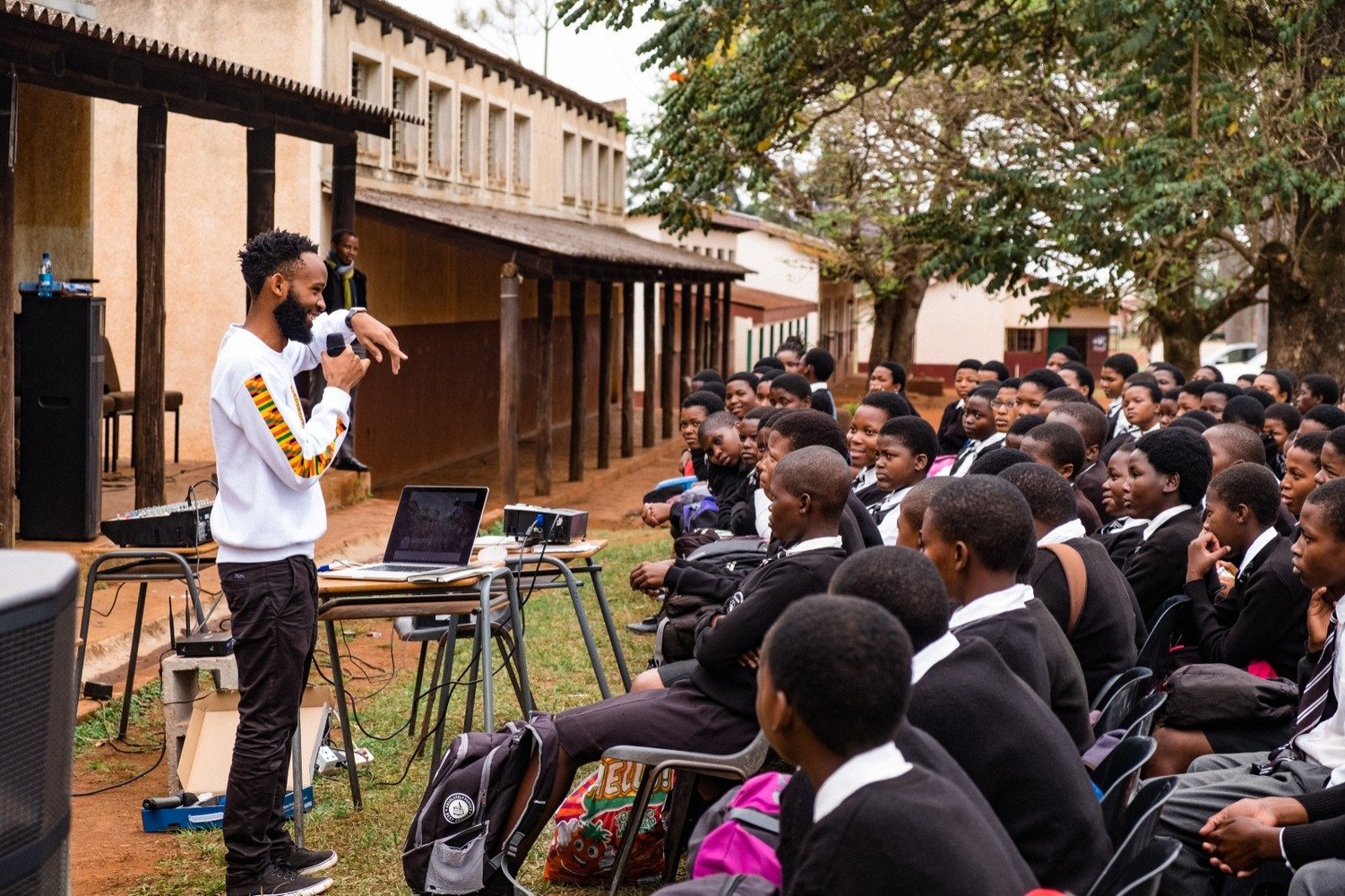 Design justice is grounded in personal experience and built through everyday actions. Wandile Mthiyane is an architectural designer that embodies this idea, an activist that grew up in Durban, South Africa during the Apartheid. From an early age he was drawn to building and design, a background directly tied to his childhood. He realized he wanted to build a better future by working to undo the architectural effects of institutionalized racial segregation. Today, Wandile has become recognized for creating social impact, including his work to transform his hometown of Durban.

Wandile is the CEO and Co-Founder of social enterprise firm Ubuntu Design Group, and he has also been both an Obama Foundation Fellow and One Young World Ambassador. Over the past few years, Ubuntu Design Group partnered with Andrews University M.Arch class and worked closely with low-middle income communities to develop Ubuntu Home as a solution to the current housing deficit. This is but one project that shows how working with students has had a ripple effect in the Umbumbulu community. In an interview with ArchDaily, Wandile discusses his early inspirations, how the Apartheid has shaped his design approach, and how he is building community today.

Why did you choose to study architecture?

Children around the world love to play house. Growing up in an apartheid shaped shanty-town in Durban, South Africa, my friends and I were no different, except our houses were too small to play house in. This forced us to draw inspiration from our parents and build our own playhouses. You see in my community, there were no architects because everyone was an architect.

Energized by mischief and creativity, my friends and I scavenged for scrap metals and leftover materials to build a shack next to our families’ house. We’d build these structures, then they would fall on us. We would then learn from our failures and build stronger structures. We would run to our respective houses and one of us would steal rice, another meat, and another spice and together we’d cook in our playhouse. Looking back, I am sure these were not the most fire-safe buildings but the food sure tasted good.

We didn’t have trending toys or an abundance of resources; this foundational experience, although at times painful, made my childhood and the childhood of all the kids in my community.  Although this was a fun childhood, it got scary at night because we had to sleep in constant fear of the house falling on us in the event of a heavy rainstorm or windstorm. All these things made me promise my parents that I’ll one day come back and build structurally safe, dignified affordable homes for my community.

Your work centers on social impact, from working in South Africa with Ubuntu to being an Obama Foundation Leader in Chicago. How does your background inform your work in liberating and enabling communities?

I grew up in a country where the architecture was designed to oppress one group whilst enabling the other to thrive. Apartheid was a system of institutionalized racial segregation that existed in South Africa between 1948 and 1994. It was a system the minority white folks used to effectively oppress, control, and rule over the majority native Black South Africans. Apartheid architecture in South Africa segregated communities along racial lines, this design ensured that black township communities were devoid of economic and gathering opportunities. These townships were designed to have 40qsm homes which were often placed 40km away from town so as to force black South Africans to spend 40% of their income commuting so they wouldn’t have enough money to develop their communities.

It’s been twenty 26 years since Nelson Mandela became president and apartheid ended, the laws have changed but the neighborhoods haven’t. People in the township still spend 40% of their income commuting 40km to work in town and this is just one of many examples to show the lasting impact of exclusionary design. Growing up seeing this gross injustice orchestrated by architecture I made it my life’s work to use that same tool that was used to oppress, to bring people together, and enable opportunities for all.

What is one endeavor you’re working right now?

In light of the recent protest against police brutality and the continued work of the Black Lives Matter movement, it’s important for us as architects to take responsibility for the fact that design has historically been one of the most powerful tools to perpetuate systemic racism. Architecture is at the root of racial bias against people of color in America and around the world. Like apartheid architecture in South Africa informal discrimination and segregation have always existed in the United States, in 1934, the Federal Housing Administration (FHA) instituted the National Housing Act that began the discriminatory practice called redlining. I believe the first step in us addressing our past and defining a more equitable future starts by us educating the next generation of socially inclined architects and that’s why I’m excited to have started a program that does just that.

Ubuntu Architecture Summer Experience is an intercollegiate vertical studio experience open to students from around the world. We designed the course with the ambitious intention of it being more than just a class but being a collective of young people who will be working to start chipping away some of the effects of apartheid architecture in marginalized communities in South Africa. Students get to use South Africa as a case study to highlight the role architecture plays in enforcing systemic racism.

Learners will be designing and helping build a home for a resilient family that was excluded by apartheid architecture in Durban, South Africa. The course offers an alternative to the heavily Eurocentric architectural education, where attendees will get to learn about Zulu architecture and the history of South Africa and how it affects architecture today. Our hope is to train the next generation of world architects to design places that are inviting, equitable, and inclusive of all. It’s not enough to understand the problem, you also need to be the solution.https://www.youtube.com/embed/oR-Puj3Ssx0?theme=light&showinfo=0&color=white

Changes due to COVID-19 have been swift. How do you think the pandemic will shape design?

For a long time working across states and continents was reserved for a few big firms and colleges, but COVID-19 and technological advancement has taught us that we can all do projects around the world from the comfort of our own homes. I think COVID-19 has sparked a revolution that will foster collaboration, cross-pollination of ideas, and most importantly, a more beautiful and equitable world to live in.

As your work learns from apartheid architecture in the context of South Africa, how do you believe designers can work to address systemic racism in their own practices and communities?

The first step to addressing systemic racism in architecture is designers realizing the gravity of their god-like power of shaping people’s experiences. Architecture is never neutral; it either heals or hurts. According to a study by the National Community Reinvestment Coalition, three out of four neighborhoods that were redlined on government maps 80 years ago continue to struggle economically. We as architects are not just the designers of glass skyscrapers and infinity pools but are direct contributors to these injustices. As Winston Churchill best put it, “We shape our buildings; thereafter they shape us.” Once firms get this they can start consciously designing spaces and places that take into account the experiences of people beyond their own culture and they can only effectively do this if they bring people of color into their design process.

I think it’s imperative for firms to actively start giving opportunities to employees that don’t look like them. For far too long firms have been designing for people of color it’s time they let people of color take lead in the design of their homes and communities. Firms can join NOMA, Young Architects, and AIAS and be a part of creating a socially inclined generation of architects by sponsoring students (their interns) to go learn about the role of architecture in systemic racism through the Ubuntu Architecture Summer Abroad.

As you look to the future, are there any ideas you think should be front and center in the minds of architects and designers?

This Article first appeared on Arch Daily. For the original click here