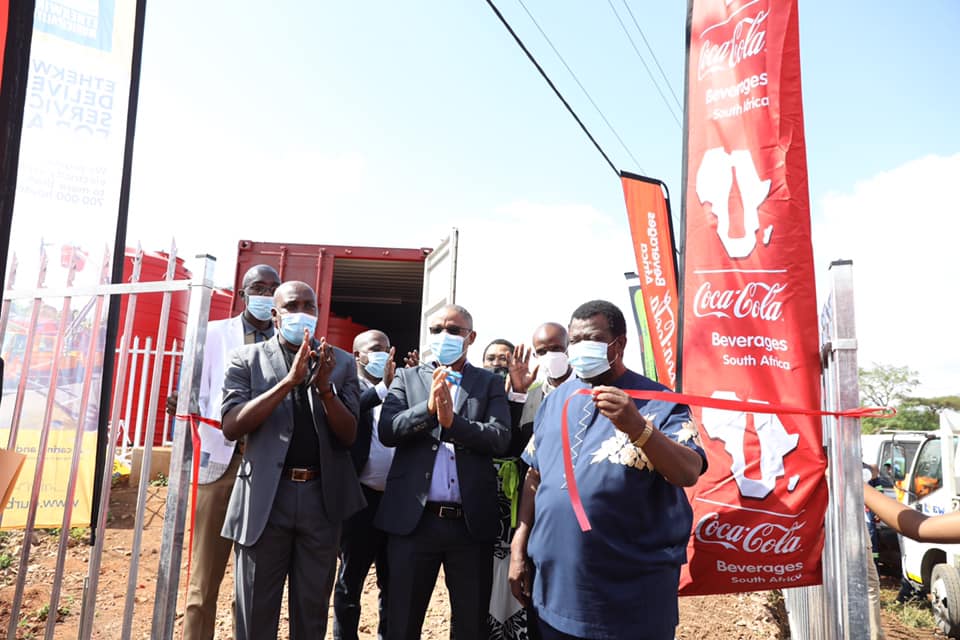 The community of Ekhusane in ward 3 will benefit from millions of litres of clean, potable water, thanks to a modern ground water harvesting system installed by Coca-Cola Beverage SA (CCBSA) in a unique public-private partnership with the City.

EThekwini Mayor Councillor Mxolisi Kaunda launched this critical project on 12 April, together with the Education MEC Kwazi Mshengu, the traditional leadership of the area and CCBSA Head of Enterprise and Community Development, Tsholofelo Mqhayi.

Dubbed the Coke Ville Ground Water Harvesting Project, the system works through a borehole accessing a plentiful natural reservoir of water that is connected to an electric water treatment unit and is expected to deliver a maximum capacity of 108 000 litres of water per day. This will bring much needed relief and dignity to the local community. In addition, the nearby New River Combined School has already benefitted from the project by having their water and sanitation facilities upgraded.

Mayor Kaunda said: “While water is a scarce and a vulnerable resource in South Africa, it is a basic living need as well as a constitutional right for all residents.  EThekwini Municipality has a mandate to provide water and sanitation services to communities. The issue of addressing the drought and ensuring access to safe and clean water is one of the top priority actions in Durban’s new Climate Action Plan.”

He added: “One of the challenges we are facing as a Municipality is rapid urbanisation and the ongoing influx of people into traditional communities. This continues to put a huge strain on our water infrastructure. However, we are happy to report that the City has already invested R2 billion to improve water provision in the Western Aqueduct which will significantly improve water supply in this area.”

Mayor Kaunda explained that as the leadership of the City, they are proud to have increased the number of households with access to basic level of water to 82.71 percent. More importantly about 80.19 percent of indigent households have access to free basic water.

“Our goal is to achieve 100 percent coverage by 2030, the year in which we want to have achieved the goal of becoming Africa’s most caring and livable city,” he said. Praising CCBSA for their initiative, Mayor Kaunda said this initiative by Coca-Cola demonstrates that working together as business and government, “we will be able to address a number of developmental challenges facing the country.”
“We strongly believe that your action will encourage other companies to contribute to good causes that seek to improve the lives of poor communities. As eThekwini Municipality, we will continue to partner with Coca-Cola to make clean drinking water accessible to all, particularly in the rural communities,” he said.

Aimed at rural and peri-urban communities, CCBSA has developed five community-based groundwater projects thus far in the country. These viable self-sustaining, off-grid, solar-powered groundwater harvesting, and treatment projects have been identified in Limpopo, KwaZulu-Natal and the Eastern Cape, with a target to deliver over 90 million litres per year by the end of 2021.

To date, Coke Ville has already handed over four solar-powered self-sustaining community-based groundwater projects in Limpopo and the Eastern Cape. This project will be the fifth one to be handed over and due to the security concerns established during feasibility and will not be utilising solar power. These will be powered through the Mmunicipality’s electricity grid.

Ekhuseni and eNgonweni villages within the Emaqadini area were identified as the most suitable for the Coke Ville pilot project; following multiple hydrological assessments that were conducted in various rural areas within the Municipality.