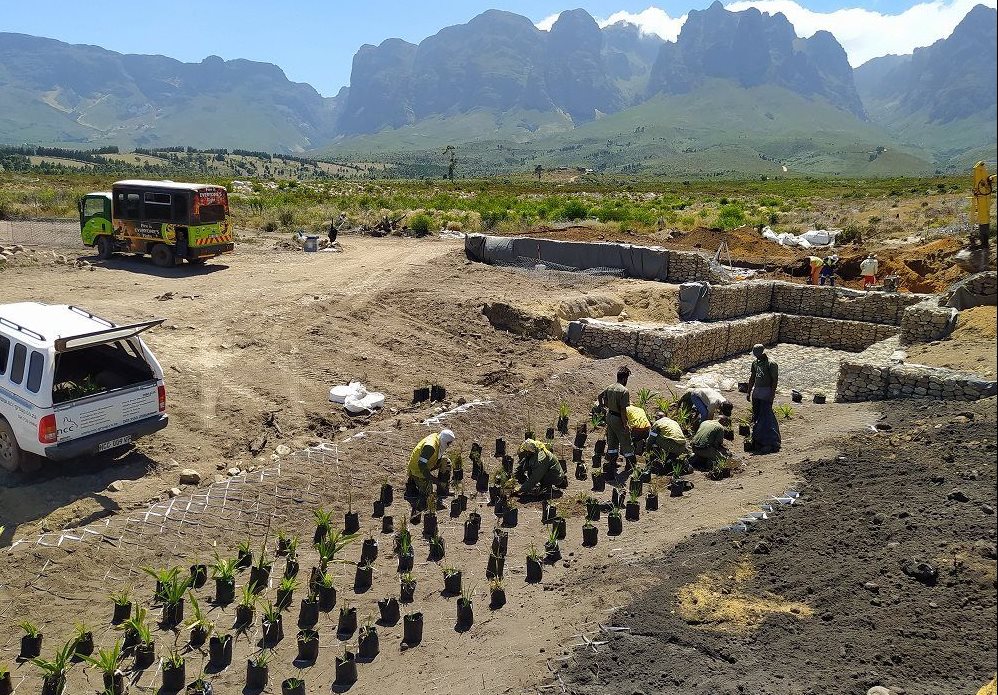 Known for its biodiversity and commitment to environmental sustainability, Vergelegen Wine Estate in Somerset West has completed an extensive programme to rehabilitate eroded watercourses.

The environmental undertaking on five sites has seen the removal, storage and replanting of some 15,000 indigenous plants that were housed temporarily while the programme was underway.

The R12m project has saved rehabilitated wetlands and Lourensford Alluvium Fynbos vegetation, which could have been badly affected by sediment washing onto the area. In addition, it has halted sediment contamination of the Lourens River, part of which runs through the estate.

This is the only river in South Africa where a section of adjoining land is a Protected Natural Environment.

Vergelegen has been known for completing the largest privately funded alien vegetation clearing project in South Africa. Some 2,200 hectares of the 3,000-hectare estate were cleared of alien vegetation by 2019.

It is likely that the woody alien vegetation laid the foundation for erosion by displacing the indigenous deep-rooted species which protect the soil against degradation in the event of heavy rainfalls. Structures that concentrate the flow of water, such as roads and road culverts, also contributed to the erosion.

Leslie Naidoo, Vergelegen risk and commercial manager says: “We had completed a large portion of the alien vegetation clearing when, in 2013, we experienced heavy rains and severe flooding. This increased peak flow rates of water run-off and created gullies in many of the watercourses. In some areas, rocks were washed out and blocked the natural watercourses flowing to the river, forcing an unnatural distribution of higher flows to be channelled onto the estate.

“The resulting erosion was initially not easy to see because the land was still covered with vegetation. A wildfire in January 2017 exposed the areas and signs of damage could be identified; without the standing vegetation to stem the water flows, the situation worsened during the winter rainfalls. We immediately brought in experts and in due course received reports from an environmental consultant, a specialist engineer and a wetland expert.

“There was agreement that, without suitable interventions, there would be degradation resulting in “escalating and irreversible ecological damage and huge financial costs.”

In a massive undertaking, 30 erosion control weirs were constructed, sediment was removed, and rocks and other materials were placed in the watercourses.

Of the five zones, section five was particularly challenging. Specialist engineer Hans King visited the estate in 2017 to stabilise a 40m long gulley. He noted “a strange, very narrow (about 500 mm) but very deep (about 2 metre) groove in the soil extending for maybe 100 metres upstream of the gulley”.

A few months later, photographs revealed that the groove had become part of the gulley, and the existing gulley had become much wider and deeper.

There was the danger that a wide area around the gulley, a large portion of which is home to the critically endangered Lourensford Alluvium Fynbos, could be covered by a deep layer of weathered granite and silt. Approvals required in terms of the National Environmental Management Act turned out to be a lengthy process and the erosion worsened with every rainfall. The rehabilitation finally got underway in August 2020.

As part of the rehabilitation programme, local indigenous vegetation was prepared for replanting after the erosion control weirs had been constructed and other containment measures put into place.

The team erected a 10m x 30m tunnel in August 2020. Plants from the eroded areas were stored in the tunnel for replanting, while new plants were also propagated.

This aspect of the programme was delayed when 120+ km/h strong winds lashed the estate in October 2020, damaging the tunnel and destroying some plants. Nonetheless, many survived and more were propagated, and in 2021 replanting began.

In addition, green, well-rooted palmiet was gathered from a dam spillway stockpile and placed vertically in the weirs. Palmiet initially requires flowing water over the rhizome and stem until the roots re-establish in the soil. Water was pumped in using the Vergelegen firetruck.

“This project has been a major undertaking, but it has ensured that we have controlled the erosion that would have had an extremely damaging impact on the land,” says Naidoo.

“With 1900 hectares of the estate promulgated as a private nature reserve with the same protection status as the Kruger National Park, we are committed to the long-term sustainability of the estate so that it can be shared with future generations.”

This article first appeared on Bizcommunity