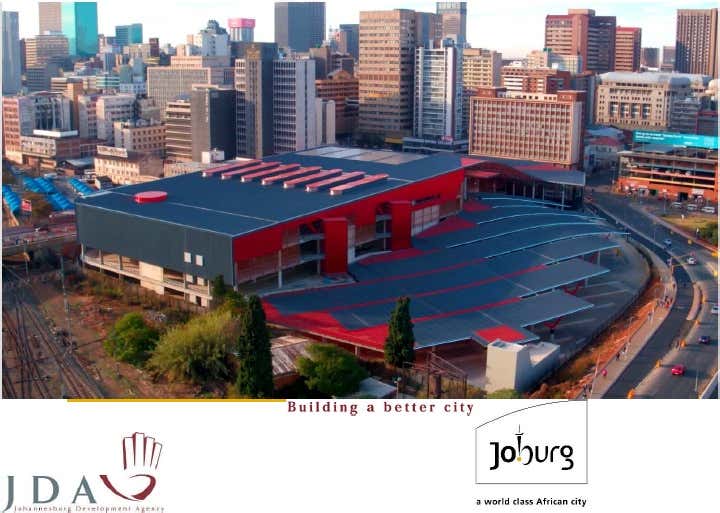 At 50 000m², the state-of-the-art, Johannesburg International Transport Interchange (JITI), an international long distance and cross border transport hub, is one of the City of Joburg’s latest and largest infrastructure developments.

The Johannesburg Development Agency (JDA), on behalf of the City’s Transport Department, has been undertaking the construction of JITI, which has now reached practical completion and is set for launch at the end of June 2021.

The hi-tech, advanced international long distance and cross border transport and shopping hub is located in the heart of the Johannesburg CBD. In alignment with the JDA’s emphasis on creating resilient, sustainable, and liveable urban areas in identified transit nodes and corridors, JITI will be the biggest and most commuter friendly, public transport facility for long distance travellers on the African continent, once opened.

“Transport is one of the backbones of Johannesburg’s economy and plays a significant role in connecting residents to education, business and work opportunities. The JITI facility will see approximately 1500 travellers per day arrive or depart to destinations in the SADC Regions,” Member of Mayoral Committee (MMC) for Transport, Cllr Nonhlanhla Makhuba said.

With easy access to transport routes, like the Nelson Mandela Bridge and the M2 Double decker freeway, JITI’s location, which lies in Ward 60 in Region F, will usher in a new era for long distance travellers, with amenities to make departure and arrival easier, and a pleasant experience. To banish long waits by long distance travellers for buses and taxis in the inner city, the facility’s 50 000m² floor area includes a bus terminal for cross border buses as well as ranking and holding space for 800 taxis; ranking space for 158 taxis and ranking for 20buses.Through ease of access, disabled commuters will be catered for throughout the facility and there will be clear electronic signage indicating arrival and departure times.

HI-TECH CREATES COMMUTER SAFTYCCTV cameras throughout the facility, good lighting and wide corridors, ensure that the world-class, hi-tech JITI facility is designed to be safe and attractive, transforming long distance and cross border travel. The security of the facility will be managed from a control room equipped with a building management system. Only vehicles which have the correct operating licenses and vehicle fitness certificates will be used in the facility. The advanced access control, which

will feature a dual authentication, including license plate recognition, will be one of the innovations to ensure that vehicles are operating safely. The latest technology, in green building design, has also been incorporated throughout the facility, including extensive solar panels on the building.

FOUR-STORY HUB TO INCLUDE RETAIL

With 3300m² devoted to retail – for both large retail outlets, banks, ticketing offices, food courts and informal traders – the facility will also create a variety of economic opportunities, as well as provide social amenities for inner city users and residents. Additionally, JITI will provide a space to stimulate economic advancement for both small, medium and micro business in the inner city. Outdoor advertising opportunities include dedicated electronic and static billboards.

The state-of-the-art JITI will be one of the critical projects which will ensure that efficientmass public transport networks and connections, transit-orientated multi-use precincts,together with strategic land-use planning and zoning regimes are realised to connect peopleto opportunities to live, work and play in the city.The scope of works for the construction of the facility included bulk earthworks, water andsewer reticulation, concrete superstructure, electrical works (lighting, smoke detection, solar panels, public address system, CCTV, access control, standby generator and substation),mechanical works (ventilation and smoke ducts, air-conditioning system, lifts, chiller, BMS,fans, and sound attenuators), wet services and fire, exterior works (paving and kerbinstallation), road works and furniture and artwork.“Infrastructure underpins economic activity and catalyses growth and development. TheJDA have been responsible for spearheading and delivering the City of Johannesburg’sstrategic infrastructure projects since its inception and have undertaken 1000 projectsemphasising the renovation, innovation and re-imagination of the city’s built environmentand urban communities,” said MMC for Development Planning, Cllr Thapelo Amad.“The construction of the JITI facility is another example of the JDA’s objectives of efficiently,effectively and economically deliver sustainable social and economic infrastructureprojects,” MMC Amad, added.