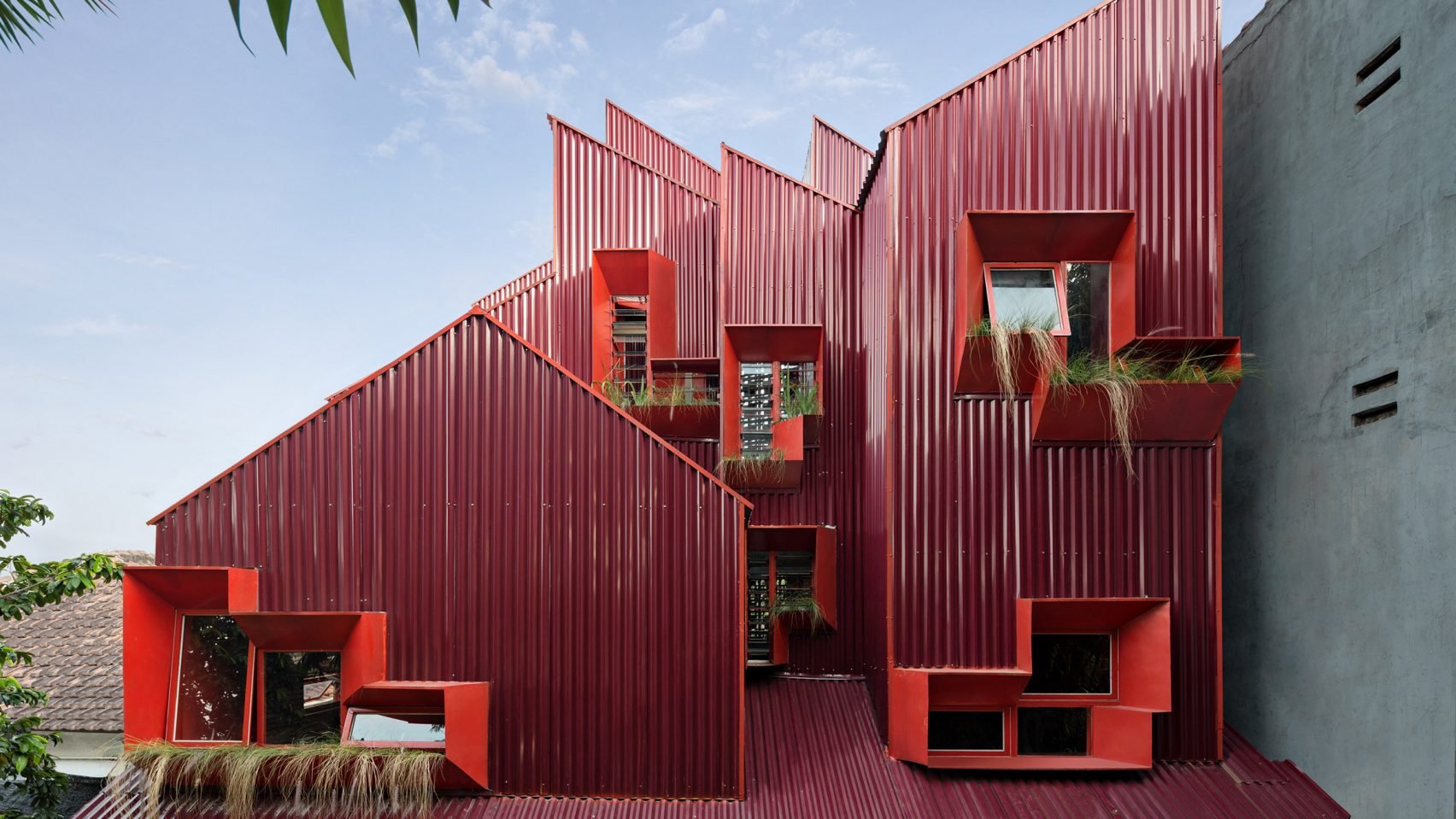 Ismail Solehudin Architecture has designed a red metal and brick boarding house in Indonesia where the stairs serve as both a corridor and a light-filled social space. Titled the Stack By Step Red Zone Boarding House, the building was designed for a small block in the city of Bogor, West Java, necessitating a creative floor plan to squeeze in 11 dormitory rooms.

Ismail Solehudin Architecture‘s solution was to eschew the common style of having a single- or double-loaded corridor for a multiple-occupancy residence.

Instead, they focused on the stairwell as the one site of horizontal and vertical circulation between the units.

“The advantage of the circulation system that we used, compared to boarding house or apartment designs that use a double-loaded corridor circulation system, is that this building has a smaller area with the same number of units,” studio founder Ismail Solehudin told Dezeen.

The boarding house has 178 square metres of built area, incorporating the 10-metre-square rooms plus communal space, a parking area and a service area.

So the stairs would be an attractive social area, the architects turned them into a sculptural element using a suspended steel structure.

The perforated metal steps and skylights allows light to flood into the space.Related storyArquitectura-G installs bright red family home on top of garage

The feature provides “an iconic and memorable experience for the residents”, according to Solehudin, with nooks, tables and benches creating places to linger.

An additional architectural statement is the red-coloured facade, which the the studio chose for its intensity.

To reflect its function as a boarding house, the team also wanted the outside of the building to give the impression of a “cumulative stacked house” — an image that is enhanced by the fragmented sloping roof.

“The attractive shapes and contrasting colours of the environment make it look like a sculpture and its inhabitants seem to live in a sculpture,” Solehudin said.

The roof design has the added benefit of suiting the tropical climate and potentially creating more air circulation inside of the building.

To further aid the flow of air, the building is set back on every side, creating a void between neighbouring structures.

It has a concrete and steel structure, with exposed brickwork creating a textural contrast against the red metal walls. The facade and roof are Zincalume-coated steel, a material chosen for its lightness.

“Choosing lightweight roofs and walls is a strategy to reduce the load on the substructure, which can reduce the volume of concrete when compared to three-storey buildings with general materials,” Solehudin said.

The exposed materials also minimise the need for maintenance, as they can be left to age naturally without repainting.

In addition to the stairs, the building has communal areas on its ground floor, in the empty space formed by pilotis. This is used by the residents as a parking area, laundry and pantry.

Within each of the 10.3-square-metre rooms is a private bathroom and mini walk-in closet.

Stack By Step Red Zone Boarding House was completed in 2021. Other recent projects in Indonesia include Ramboll’s series of earthquake-proof prototype houses made of bamboo on Lombok and AGo Architects’ skinny house in South Jakarta.

The photography is by Mario Wibowo Photography and Andhi Prayitno.

First Published on DeZeen. For the original click here