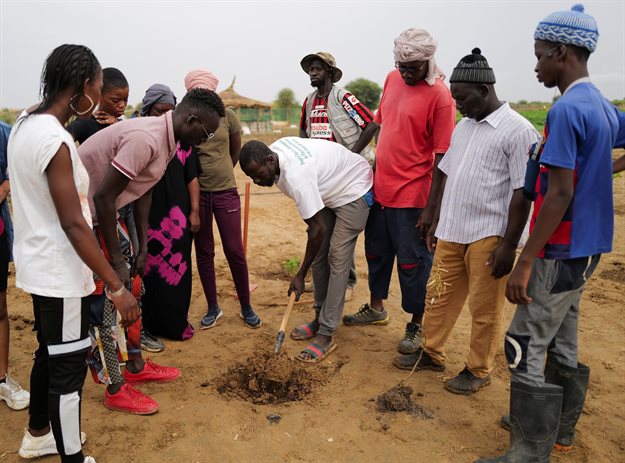 Every night Moussa Kamara works at his bakery preparing hundreds of loaves but at sunrise, instead of going home to sleep, he now starts a second back-breaking job – hoeing the earth and tending newly sown seeds in a specially designed circular garden.

Kamara, 47, believes the garden will prove even more important than the bakery in the future for feeding his extended family, including 25 children, and other residents of Boki Dawe, a Senegalese town near the border with Mauritania.

He is part of a project that aims to create hundreds of such gardens – known as ‘Tolou Keur’ in Senegal’s Wolof language – that organisers hope will boost food security, reduce regional desertification and engage thousands of community workers.

“This project is incredibly important,” said Kamara, finally at home after a night spent at the bakery followed by 10 hours of cultivating edible and medicinal plants in the garden.

“When you grow one tree, over 20 years people and animals will benefit from it,” said Kamara, whose commitment and hard work have earned him the role of garden caretaker.

The project marks a new, more local approach to what is known as the Green Wall initiative, launched in 2007, that aims to slow desertification across Africa’s Sahel region, the arid belt south of the Sahara Desert, by planting an 8,000km line of trees from Senegal to Djibouti.

The wider initiative has only managed to plant 4% of the pledged 100 million hectares of trees, and completing it by 2030, as planned, could cost up to $43bn, according to United Nations estimates.

In cities, where the majority of South Africans live and which have been severely impacted upon by Covid, there are many nature-based solutions…

By contrast, the ‘Tolou Keur’ gardens have flourished in the seven months since the project began and now number around two dozen, said Senegal’s reforestation agency.

Three months after a garden is completed, its agents begin a series of monthly visits over two years to assess progress.

Project manager Karine Fakhoury said it was important that local people felt fully engaged: “This is not an external project, where somebody comes from outside and tells people what to do. It is something entirely indigenous.”

The gardens are partly a response to the Covid-19 pandemic.

Senegal shut its borders early last year to try to curb the spread of the coronavirus, cutting imports and exposing rural communities’ dependence on foreign food and medicines.

‘Smaller actions that are permanent’

Aly Ndiaye, a Senegalese agricultural engineer based in Brazil who got stuck in Senegal when the borders closed, stressed the importance of “smaller actions that are permanent”.

“A thousand Tolou Keur is already 1.5 million trees,” said Ndiaye, the mastermind behind the circular bed design. “So if we start, we can do a lot.”

Not all the gardens have succeeded. In the remote village of Walalde, the desert has already begun to reclaim the land set aside and there have been problems with the solar-powered pump.

But in the eastern town of Kanel, the garden is thriving. Its caretakers solved a water pump issue by digging traditional irrigation canals. A concrete wall and guard dogs help keep out rodents that would eat the lush mint and hibiscus plants inside.

Kamara the baker believes the gardens could offer a further benefit – discouraging sub-Saharan Africans from embarking on long, perilous journeys as illegal migrants in search of better lives in Europe and America.

“The day people realise the full potential of the Great Green Wall, they will stop these dangerous migration routes where you can lose your life at sea,” he said. “It’s better to stay, work the soil, cultivate and see what you can earn.”