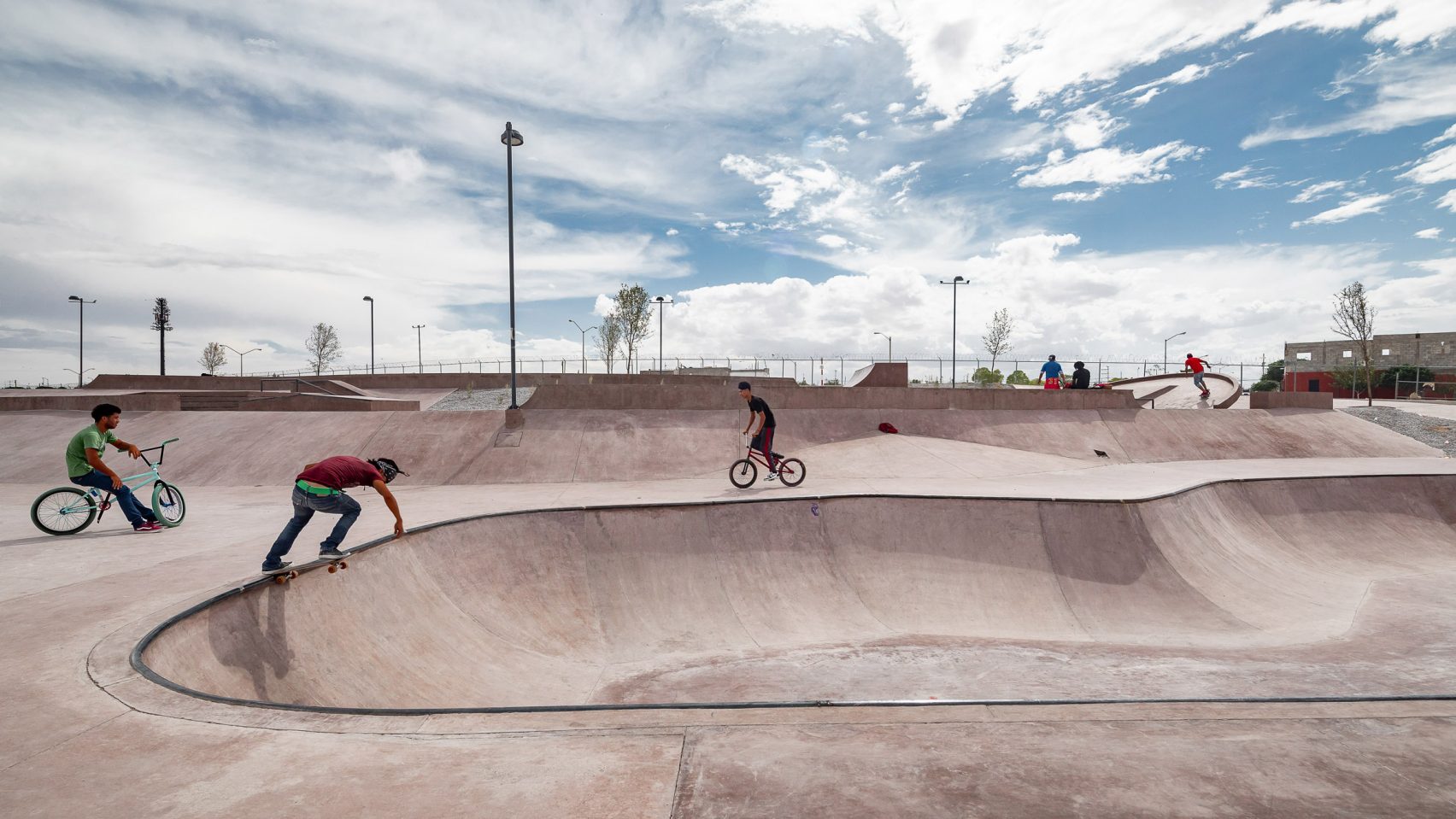 The dunes of the Chihuahuan Desert informed the undulating, pink concrete landscape of this new skatepark in Ciudad Juárez’s Oriente Park. Coordinated by landscape architects Valia Wright Sánchez and Eduardo Peón Velázquez with architect Francisco Elías of Elías Group, the park on the northern border of Mexico is part of a governmental urban improvement programme to improve marginalised neighbourhoods.

Called La Duna, the skatepark’s dusty pink concrete landscape is split into three zones: a bowl, an area for street-style skating, and a beginner’s area – divided by trees and small garden spaces planted with desert flora.

“[The team] established as their main goal understanding the relationship between this section of the park and the surrounding neighbourhood, at the same time bringing in a bit of the natural context of the Chihuahuan Desert,” said the designers.

This reference to the desert influenced the form of the park’s obstacles, intended to evoke the Samalayuca Dune Fields in Chihuahua, as well as the sandy pink pigmentation of the concrete.

To the south, a large concrete viewing deck sits atop a brown concrete classroom and office block and a cylindrical bathroom block, creating open space beneath that forms a “portico” leading from a public square through to the skatepark.

“The building was conceived as a cave by which the covered square and the skating rink communicate, through a portico that protects the service module, an office and three classrooms,” explained the designers.

“The shape of the portico, with the triple column modules, is a nod to the architecture of the 1950s and 1960s that characterises the urban landscape of Ciudad Juárez.”Related storyYinka Ilori creates “joy and excitement” with colourful skate park in Lille

These learning spaces will provide classes and workshops as part of a strategy to see the park used by both young people and adults in the area.

Amphitheatre-style concrete steps providing seating lead up to the viewing platform, dotted with further concrete seating areas and overlooking both the skate park and an artificial lake on the other side of the site.

The skate park is wrapped by an extension of an existing cycle route that links the existing park with the surrounding area, intended to better integrate it with the wider neighbourhood.

Another recently completed project that draws on Mexico’s natural landscape is the Paradero Hotel by Ruben Valdez and Yashar Yektajo, which uses beige concrete to blend in with the terrain.

The photography is by Onnis Luque