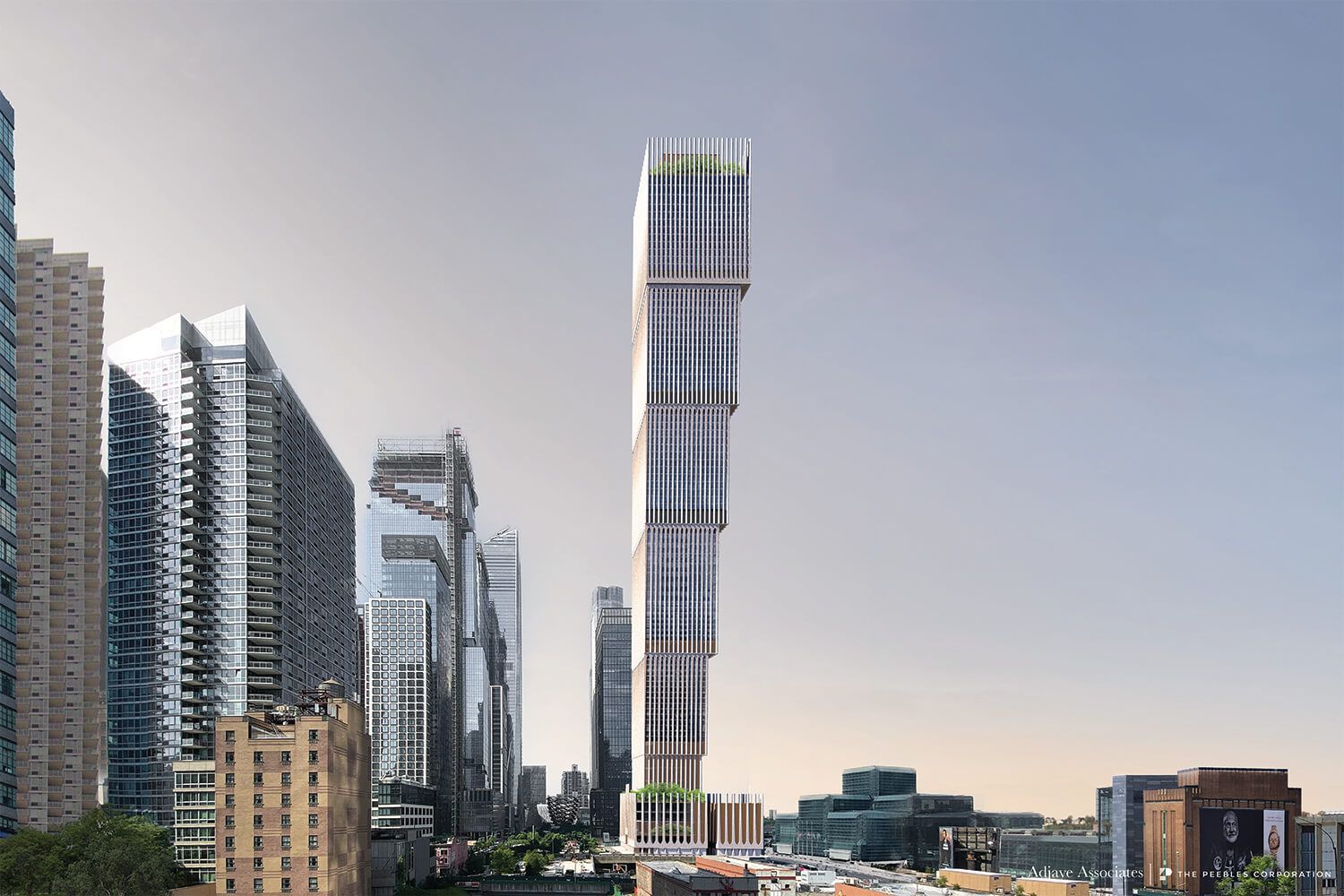 A team competing to fill Site K, a vacant full-block plot of land directly across from the Jacob K. Javits Center in Manhattan between West 35th and West 36th Streets, has unveiled a scheme for a tower that, if built, would be Adjaye Associates’ tallest to date.

First uncovered by Real Estate Weekly on October 13, a team backed by The Peebles Corporation as developer has submitted a response to a request for proposals (RFP) to infill the site at 418 11th Avenue, part of Related Companies’ Hudson Yards neighbourhood. The proposal was presented before the Empire State Development Corporation on Thursday, which issued the RFP and will ultimately select the winning project for the site.

If built as The Peebles Corporation team is proposing, Hell’s Kitchen would be the new home to the tallest tower in Hudson Yards and the third tallest in all of New York City, narrowly edging out 111 West 57th Street. Adjaye Associates has designed a 1,500-foot-tall skyscraper that cantilevers as it rises from a multistory base, flipping the typical massing of the stepped tower upside down. Similar to the firm’s 66-story 130 William in the Financial District, Adjaye Associates has proposed integrating and playing with the traditional arch. Vertical stone bands would wrap the facade of the building in parallel, with arched tops (or upside-down arches for the bottom) capping each blocky segment of the tower.

The motif continues to the base, too—Patch got its hands on additional renderings and they show inverted arches stretching all the way down nearly to ground level. From the images released thus far, it appears a heavily flecked concrete is being pitched, which lends the facade a pixelated effect when viewed from afar.

While design-wise the tower would be a breath of fresh air for an area heavy with all-glass towers, programmatically it could have a hard time passing muster with Community Board 4. As proposed, the building would contain commercial office space, a theater, two hotels, a skating rink, plenty of outdoor terraces, an observation deck, and a new headquarters for the Mid-Manhattan NAACP branch—but no residential units. While Community Board 4 requested affordable housing be included in any proposal for the site, the state has not made that a requirement.

If The Peebles Corporation gets its way, the Site K project would be the city’s first majority Black developed, designed, and constructed projects. As Patch points out, the McKissack Group, which has been tapped as the construction firm of choice, is “the oldest minority/women-owned design and construction” firm in the United States.

The Empire State Development Corporation has not released an estimate for when it will disclose the winning proposal for the site. AN has reached out to Adjaye Associates for comment and will update this article accordingly.

This article first appeared on Archdaily. For the original, click here