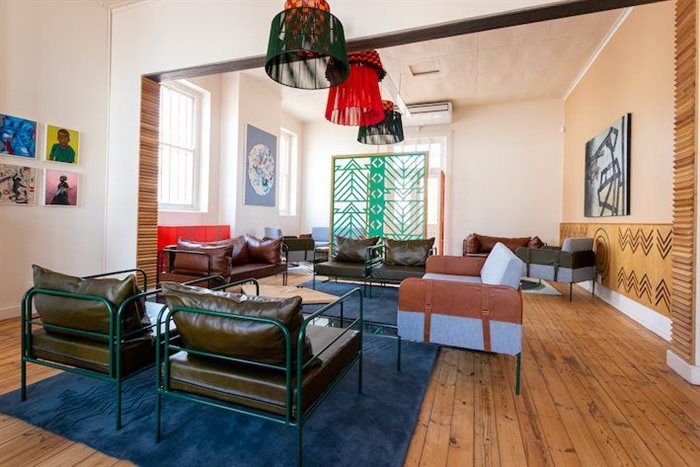 Constitution Hill has gone through numerous iterations since being commissioned in the 19th century. Now, thanks to an initiative led by Clout/SA and supported by Nando’s, three rising local designers have creatively reimagined the Old Fort Meeting Rooms and Coffee Shop at the historic landmark in Braamfontein, Johannesburg.

During the struggle, many anti-Apartheid stalwarts served time here, as did tens of thousands of ordinary South Africans. Today, the former prison and military fort serves as a living museum and a venue for exhibitions and other events, as well as being the home of the country’s Constitutional Court.

With the redesign of the Old Fort Meeting Rooms and Coffee Shop – which are now filled with furniture and lighting from some of the most innovative young South African designers – it has also become a window into the present as well as the future of local design.

“The Meeting Rooms present an opportunity to incorporate the particular aesthetic of South African design, artistic culture and visual language into the rich tapestry of history at Constitutional Hill. This is also a unique opportunity to develop and grow emerging interior designers that have a strong connection to heritage, and the ability to create sensory experiences,” says Tracy Lee Lynch, creative director of Clout/SA and the Nando’s Design Programme.

With the support of Nando’s, which funded the initiative as a gift to Constitutional Hill, Lynch nominated three interior designers to pitch proposals for the redesign. Afri Modern founder Sifiso Shange, Pinda Furniture and Interior Design founder Siyanda Mbele, and Renaissance Design founder Glorinah Khutso Mabaso (who invited Omni Design’s Nelson Kubheka to collaborate with her on the pitch) were all asked to put forward their concepts for consideration.

“These selected designers speak a language of rebirth and transformation. They have found new ways of expressing our South African heritage, of making creative connections and building community. Storytelling, art and design are their chosen tools,” Lynch explains.

Beyond being an interior design project, the challenge turned into a journey of learning for the designers, each of whom had to take a deep dive into the history of Constitution Hill, and therefore, the history of South Africa.

“It wasn’t just about designing and putting mood boards together. It was about how to create a conversation and tell a South African story,” Mbele states. “When I started on the research with my team, we were talking about how little we knew about our history until we visited the site… and every time, with each bit of research, we stumbled on something new.”

For Mabaso, the process took on personal significance: “My dad was actually an activist. He was the first vice-president of COSAS… I grew up hearing these stories from him; and it’s the first time now that I’ve interacted with a space that speaks the same language. It became very real.”

“The project itself allowed me to realise so much about the history of our country and where we are today… and the centre of everything was the people themselves,” says Shange.

This article was first published on Bizcommunity. For the original click here