The 22 Most Anticipated Projects of 2022 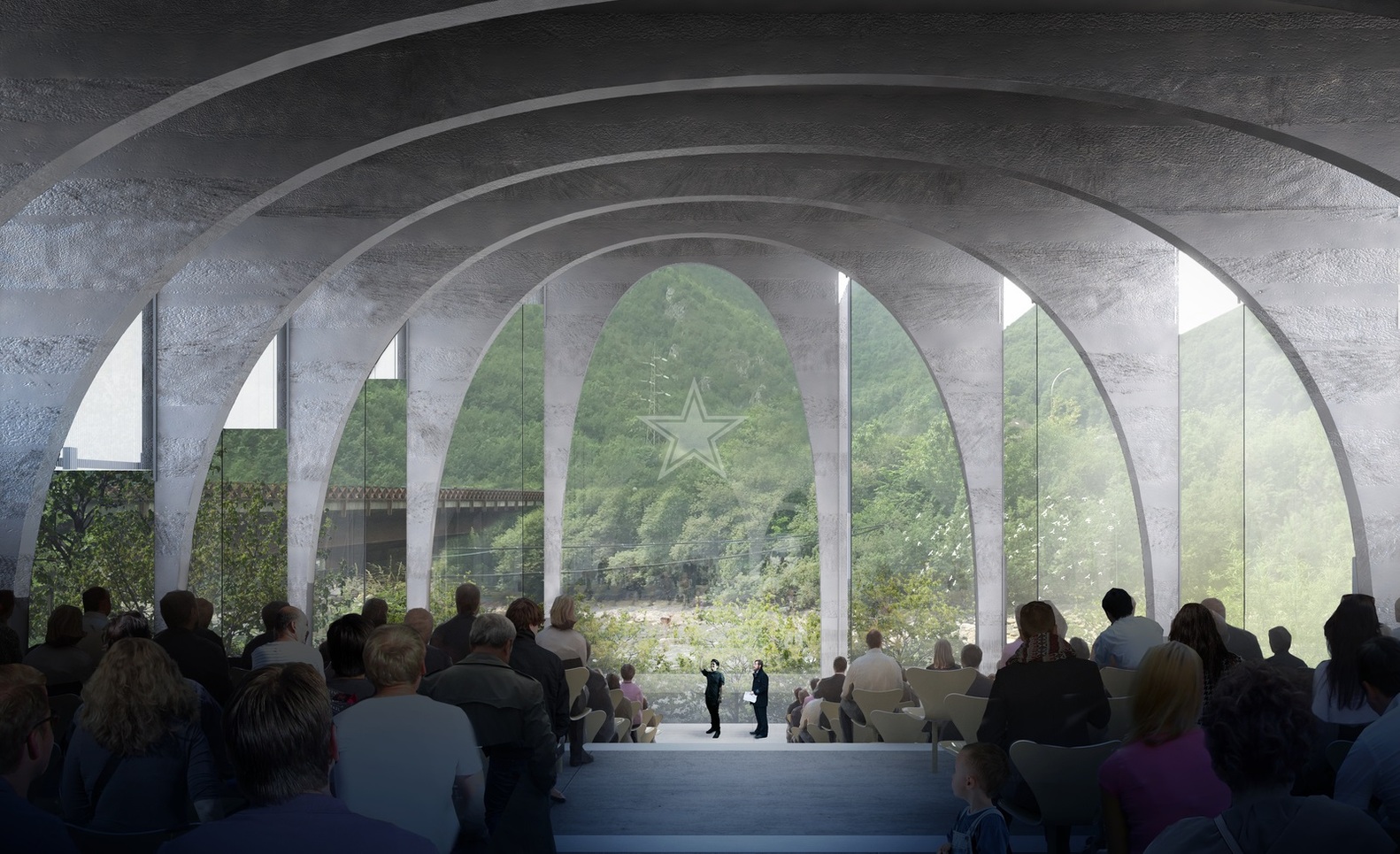 As the new year kicks off, we’re taking a look ahead to the projects we’re most looking forward to in 2022. With a mix of cultural and commercial programs, the designs are located across five continents, with many under construction for multiple years. Designed across a wide range of scales, they represent a mix of interconnected landscapes, museums, and new skyscrapers.

A number of projects opening this year have had construction timelines shaped by resource availability and labor issues related to the global pandemic. At the same time, there are also projects that have moved forward quickly and their construction showcases the range of building conditions around the world. Drawn from different climates and material approaches, they reflect design and construction through a global lens.

Below, the projects we look forward to seeing in 2022:

OMA’s Taipei Performing Arts Center (TPAC) is nearly complete in Taiwan. Consisting of three theaters, each functioning autonomously of each other, the OMA scheme seeks to depart from the traditional consensus of performing arts centers as simply containing a large auditorium, medium-sized theater, and small-size black box. The compact form allows for several “faces” defined by the individual theater protruding from the central cube.

Tokyo-based SANAA has designed a new addition to the Art Gallery of New South Wales (AGNSW) in Sydney. As the firm’s first building in Australia, the project will transform the flagship art museum and connect through an outdoor public art garden overlooking Sydney Harbor. The new building is designed to contrast the Gallery’s 19th-century neo-classical building as a light, transparent and open addition.

Jean Nouvel unveiled the design of his tower project back in 2016: the 22-story building is located near Avenida Paulista in São Paulo. The skyscraper, dubbed Rosewood Tower, is part of Cidade Matarazzo, a 27,000-square-meter site containing historic buildings that once made up the Filomena Matarazzo maternity hospital. A heritage-listed site, the Allard Group is restoring the buildings and creating a cultural center, of which Nouvel’s new tower will be a central component. Set to contain a hotel as well as residential units, Nouvel’s tower is designed to be a vertical continuation of the local landscape.

Adjaye Associates have been selected as the winners of The Abrahamic Family House competition, in Abu Dhabi. The landmark project, on Saadiyat Island, is a space where 3 religions will come together with the implementation of a mosque, a synagogue, and a church. Sitting on a secular visitor pavilion, the project commissioned by the Higher Committee for Human Fraternity is a first of its kind.

Homebuilding company Lennar and construction technologies company ICON are collaborating with BIG-Bjarke Ingels Group to build the largest community of 3D-printed homes to date. The 100-home neighborhood in Austin is expected to break ground in 2022 and will combine ICON’s innovative robotics, software, and advanced materials with BIG’s designs. The project comes after labor and material shortages, which have made home ownership out of reach for many American families, with almost 5.5 million shortage of single family homes across the country.

Located in the Cotai district of Macau adjacent to the Lotus Bridge crossing with mainland China, the Hollywood-inspired Studio City resort has welcomed guests and visitors to the city since 2015. Appointed in 2017 to expand the resort, Zaha Hadid Architects designed Studio City Phase 2 with new leisure, entertainment and hospitality facilities including one of Asia’s largest indoor & outdoor water parks and a six-screen Cineplex together with extensive conference and exhibition spaces.

The Nanjing Vertical Forest is located in the Nanjing Pukou District, an area selected to lead the Southern Jiangsu modernization process and the development of the Yangtze River area. The two towers that make up the complex are characterized by the alternation of balconies and plant containers modeled on Milan’s Vertical Forest, and the façades are home to 600 large trees, 200 medium-sized trees and over 2,500 shrubs and trailing plants which will cover an area of 4,500 square meters.

The ReefLine by OMA

The Istanbul Modern Museum in the historic Beyoğlu district of Istanbul is located on the waterfront of the western bank of the Bosphorus Strait, facing the Sultanahmet quarter. A new building will replace the existing one currently located between the old city streets of the Galata quarter and the existing port cruise terminal. The new museum will become an urban focal point between the old town to the west, the Bosphorus to the south, the Tophane Park to the north and the new Galataport waterside development to the east which replaces the old pier activity.

Bjarke Ingels Group (BIG) were revealed as the winners of a competition to conceptualize and design a new headquarters and bottling plant for San Pellegrino, located in the terme of the same name in the Alps of northern Italy. The competition brief asked architects to renovate and expand the historic home of the company, the world’s leading sparkling mineral water company, with a “truly innovative and technologically-advanced design” aimed at integrating into the natural aesthetic of the surrounding terrain.

SANAA’s new campus for the Bezalel Academy of Arts and Design in Jerusalem is now set for a 2022 opening. Initially proposed in 2013, the new project for Israel’s national school of art broke ground back in 2015. The campus is being built in the Russian Compound in Jerusalem’s City Center. The design will bring together 2,500 students and 500 faculty members as the school moves from the current Mount Scopus Campus.

Zaha Hadid Architects has revealed images of the new Xi’an International Football Centre for the Asian Football Confederation (AFC) Asian Cup. The facility will include a stadium with a 60,000-seat capacity, along with civic, sports, and recreational spaces for the city. Providing optimum conditions for football, the Xi’an International Football Center was also designed in a way to maximize its use by future generations after the 2023 tournament.

Lanternen by Snøhetta and WERK Arkitekter

WERK and Snøhetta were selected as the winners of the maritime center competition on the harbor of Esbjerg, in Denmark. The proposal puts in place a glowing building entitled Lanternen or the Lantern, a new addition that will gather communal activities. The new coastal landmark is both a maritime and a living center for the community along the Westcoast of Denmark. Imagined as a radiant lantern in a very particular landscape, the project aims to enhance the connection between the city and the sea.

Creating a vibrant space for social interaction, education, and appreciation for the arts, Studio Gang’s design for the Arkansas Museum of Fine Arts transforms this cultural institution into a signature civic asset. Working from the inside out, the design—which includes both new construction and renovations—clarifies the organization of the building’s interior while also extending AMFA’s presence into historic MacArthur Park, opening the museum to the city of Little Rock.

Located in Denmark’s Lolland-Falster region, Henning Larsen’s New School in Sundby marked the commencement of a historic project for the country’s sustainable educational-facility architecture. The primary school is set to be the largest construction project in Guldborgsund Municipality that ensures high sustainability parameters and community engagement. The school is expected to open its doors at the end of summer 2022, welcoming over 580 students in a nature-oriented premises.

Jean Nouvel designed the 220-meter-high tower in Paris’ major business district, La Défense. The architect and owner of the French practice has a thirty-year long relationship with the area of La Défense, that dates back to 1982 when he finished second in the competition for the Ark. Hekla will be made up of 47 floors and comprised of office space, private residential units, and student accommodation.

At the very end of 2021, Heatherwick Studio completed the first phase of the 1,000 Trees Development in Shanghai. The 300,000-square-meter project was conceived as a piece of topography that takes the shape of “two tree-covered mountains” populated by 400 terraces and 1000 structural columns. The megaproject is located on Shanghai’s Moganshan Road, proximate to the city’s M50 Art District. The latest images released show a project design to grow from its context and connect to the adjacent river.

Arturo Merino Benitez International Airport in Chile is an important connecting hub between America, Oceania and Europe and is among the most efficient and modern in Latin America. The growing number of flights demand caused the Chilean Ministry of Public Works (MOP) to set a project in motion for the extension of the infrastructures which includes the renovation of the existing terminal, the construction of a new international terminal, car park and other auxiliary buildings, water treatment facilities and a power plant.

The competition for the project was held back in 2003 and drew nearly 2000 entries from 83 countries. Heneghan Peng’s design on a desert plateau adjacent to the great Pyramids of Giza and Cairo will be the largest single collection of Egyptian artifacts and, at 100,000m2, one of the largest museums in the world. It will include extensive gallery space, conference facilities, libraries, and research facilities in addition to space dedicated to public programming.

These new Hermès leather workshops emerge from the exact site’s outline. They are drawn by the nearby nature and are placed at the perspective of the great region’s altimetry. Its orthogonal grid, orchestrated by its internal functioning, unfolding on the land, meeting the ground, encompassing the landscape, and dialoguing with the territory. The great ‘spanning’ arches follow the workshops frame.